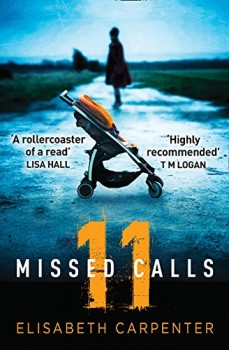 Anna’s mother Debbie disappeared 30 years ago, but Anna has never stopped looking for her in her mind, as she clings to whatever scraps of information she can glean. Then a strange note casts doubt on everything Anna has been brought up to believe.

Anna is too young to remember her mother. Debbie went missing 30 years ago and Anna has always believed her to be dead, but when a note arrives that purports to be from her, old wounds re-open and Anna can’t put her mother’s disappearance out of her mind. She needs to know what happened that night on a family holiday to Tenerife. She needs to know if her mother is dead or alive.

11 Missed Calls is a haunting tale of two women – Anna, who has grown up not knowing what happened to her mother, and Debbie, the woman who gave birth to her but about whom Anna knows very little. Anna’s father has never said very much about what happened when his wife went missing on holiday. Not long afterwards, he got together with and eventually married Monica, his wife’s best friend. Monica brought motherless Anna up as if she was her own daughter, but Anna’s never felt able to call Monica mother. Now Anna is struggling to bring up her own daughter and just when she feels she needs to rely on her husband most, she finds something in his wallet that makes her think he’s being unfaithful to her, and then Anna’s life starts to spiral out of control…

Elisabeth Carpenter paints a convincing portrait of two women, both of whom had children young, both of whom struggled with the demands of motherhood. It’s clear Anna and Debbie suffer from severe, untreated post-natal depression, which impacts on their relationships with their husbands, neither of whom seem to do much to help with their children or around the house, expecting tea to be on the table and regarding child-rearing as a female occupation.

My sympathies were firmly with Anna and Debbie, although there were times when their heads were difficult places to inhabit, particularly as their lives spiralled further out of control, torn apart by suspicion of those around them, neither knowing who to turn to. Anna’s relationship with Jack is clearly rocky, and there is a steady drip of information that makes it all too easy to question Anna’s mental state. It’s also all too easy to look for unreliable narrators in psychological suspense, as it’s a hard trope to avoid, and when each new piece of information surfaced, I was constantly evaluating what I thought I knew, which became a dizzying process after a while.

Debbie’s husband Pete isn’t much better. He forgets her birthday, seems impervious to her exhaustion, and does little to help. He also seems rather too close to Monica, and there were times when I questioned how close Debbie and Monica really were. It all adds up to a complex picture of two women’s lives, told in a dual timeline in alternating chapters 30 years apart, but the pictures of desperate motherhood painted in 11 Missed Calls were all too depressingly similar and familiar.

There were some plot points that I felt didn’t bear too much close scrutiny and the reveal, when it finally came, was something of an anti-climax that strained my suspension of disbelief rather further than I would have liked. But Carpenter’s writing is fluid and her characterisation is strong, and I enjoyed the book, despite my reservations in the closing stages.