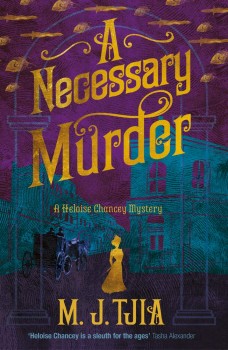 Courtesan/detective Heloise Chancey must solve a baffling series of brutal murders which appear to have their origin in events many years ago in the Far East.

MJ Tjia, whose father is Chinese-Indonesian and whose mother has English-Irish heritage, continues her series featuring the beautiful Eurasian courtesan/detective Heloise Chancey who this time is unwittingly dragged into a series of brutal murders which appear to have their origin in events many years ago in  the Far East.

Once again the portrayal of Tjia’s racially mixed characters is both positive and sensitive and, as in her debut She Be Damned, she is equally determined that women will play the significant roles, with most of her male characters pale and indecisive by comparison.

Assumptions about women and class are overturned as Heloise, a determined and fascinating character, keeps her composure and maintains her position at the peak of Victorian society with her looks and her spectacular taste in clothes, jewellery and accessories.

A Necessary Murder is based partly a notorious real-life case, and Tjia has produced a sometimes brutally shocking and complex story, full of what can only be described as lush detail and full of suspense. Its opening, a seven-year-old girl found horribly murdered on the seat of an outside privy at her family’s Stoke Newington estate, leaves the reader in little doubt about what is to follow.

The celebrated Paon de Nuit, a high-class courtesan and part-time actress who draws her clientele from among the aristocratic, rich and famous of Victorian society, is preparing for a gathering of her esoteric friends and acquaintances. When one of the guests is murdered in a similarly horrible fashion on her own Mayfair doorstep, Heloise is caught up in a whirlwind of murder and deceit.

Meanwhile Heloise’s Indonesian maid/mentor/conscience/factotum, the indefatigable Amah Li Leen, is being forced to confront events from her own past that appear to have resurfaced.

This is an enthralling historical crime story, where the twists and turns are as dark as the streets of Limehouse and the East India Dock, where it is partly set. Tjia captures the contrasting atmosphere of mid-Victorian London to great effect: the rat-infested squalor of the docklands offering a direct comparison with the gracious living, educated conversation, champagne and gaiety of Mayfair to give a less than flattering perspective on Victorian life. With a fine sense of time and place none of the smells, textures and feeling of life in the more deprived parts of London are ignored.

Heloise’s multi-layered investigation contains elements of horrible mutilation and quite explosive sex which may shock the more prudish, but they are admirably controlled and completely in context, running alongside a claustrophobic account of a family home rent with suspicion.

My complaint about Tjia’s debut was that the gutsy, determined and seductive Heloise and Li Leen were rather sketchy characters. This book gradually rounds them out.