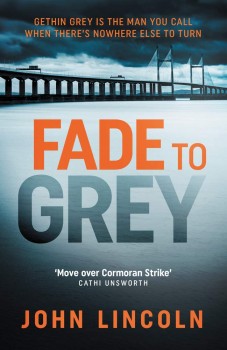 Gethin Grey and his Cardiff-based legal team are instructed by a film star to review the case of a black man convicted of the murder of a white girl in Bristol.

Gethin Grey runs Last Resort Legals from the Coal Exchange in the old Cardiff docklands, with the aid of his office manager Bex and Lee, his lead investigator. He receives a very welcome indication of a boost to the firm’s income when he is asked by famed film star Amelia Laverne to look into the murder conviction of Tyrell Hanson.

Since his incarceration Hanson has changed his name to Izma M, has written a best-seller detailing his deprived upbringing in Bristol, his conversion to Islam and a change of heart to a more spiritual way of life. He denies the crime for which he was imprisoned, the killing of Hannah Gold, a girl whose body was found in the Avon.

Grey finds that Izma’s conviction was based on circumstantial evidence; Izma admitted to a liaison with Hannah on the Bristol downs on the evening she died but his protestation that the two parted company without rancour was not believed. The police discovery of a gun in Izma’s possession and his reputation as a drug dealer did not help.

Grey and Lee visit Bristol to visit Hannah’s friends and find that immediately before her death she had been in contact with an old boyfriend, Danny, about whom she had expressed some concerns. They also visit a friend of Izma, Shaun, who is less than co-operative, but mentions an ex-policeman, Haynes, who was closely involved with the case. One of Grey’s investigators, Deano, attempts to interview Haynes and shortly thereafter is run down by a car and severely injured.

Occasional chapters dated some 15 years previous to the main action are set in Kyrenia, Northern Cyprus, where a young man, Danny, is on vacation with his parents. Danny’s father is a London gangster and is alarmed when it appears his whereabouts are known, anxiety which turns out to be well justified by the events which follow. The reader is left to speculate how Danny is linked to the death of Hannah some years later.

Grey’s efforts to get to the bottom of things are complicated by his own problems, specifically his gambling addiction. His self-absorption is driving his wife to extreme solutions, and when Laverne makes sexual demands he is ill-equipped to make a coherent response. He has to call in favours from his estranged father, a judge, before a thrilling finale and some surprises before everything is explained.

Much of the action takes place in Bristol, and those familiar with the city will enjoy the use made of local landmarks. The author seems to know the city well, but at one point has Grey take a ride down Christmas Steps on a bike missing brakes – invigorating, no doubt, but not something to be recommended.