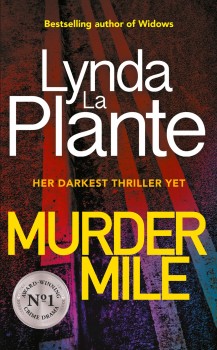 Lynda La Plante, queen of the procedural, continues her stately progress through the career of her most memorable character, DCI Jane Tennison. This fourth prequel of Tennison’s rise to become the tough, effective squad boss of the TV hit Prime Suspect in which she was so brilliantly portrayed by Helen Mirren is as good as anything she has done.

Readers will see Tennison gaining confidence as she matures into the bloody-minded character they know and love in a situation which again allows La Plante to show her ability to pick out surprising, but plausible details that give her portrayal of police life such a ring of authenticity.

Unusually for La Plante, there are a couple of minor glitches in her backgrounding of what is otherwise a realistic and compelling plot. The book is set in the 1979 ‘Winter of Discontent’, when prime minister James Callaghan’s mishandling of union demands saw a series of strikes and rubbish piled in the streets. I do not recall terms like ‘public sector’ or ‘bin bags’ being in use. As for pubs serving wine by the glass, apart from El Vino, London’s first wine bar, not even in pretentious Fleet Street!

Newly promoted DS, Tennison has been posted to Peckham, a once fashionable part of south London with shops to rival Oxford Street, now largely a deprived and rundown area, home to high levels of violent crime, drugs and gang warfare.

Once again, she must prove herself in a hostile male environment and cope with put-downs and patronising over her sex and good looks. And once again, this underestimated woman shows her sheer ability, determination and superior intellect to win over her critics, while at the same time trying to solve a major case.

On a cold, rainy February night, Tennison is on CID patrol, when a woman’s body is discovered. The following day the body of a wealthy, elderly Samaritans volunteer is found stuffed into the boot of her own car just around the corner near Rye Lane.

Tennison has already clashed with the woman’s arrogant son, who has threatened to call in one of his contacts, a very senior officer in the Serious Crime who has a reputation among female officers as a WHAT – a sufferer from wandering hand trouble!

A too obvious suspect appears and while the investigation follows what turns out to be a dead end, a third mutilated and dismembered body is found in piles of rubbish on Peckham Rye with the head flayed to complicate identification.

Newspapers are quick to link the ‘Murder Mile’ killings and stories suggesting police incompetence lead to increased pressure for a quick result. But Tennison, despite working long hours with little sleep, has been developing her own ideas – and what she uncovers leaves her doubting her own mind.

The plot is somewhat simplistic and predictable, but in real life solved crimes always look that way. There’s plenty of action, plenty of detail which must be carefully pieced together and forensics expert and Tennison’s friend Lawrence has a major part to play – and a surprise in store!

La Plante’s tense, taut style, with emphasis on plot, characterisation, location and era, comes across strongly and convincingly and carries the book to an explosive and gruesome denouement. But there is more to come for Tennison. Because of her suggestion of possible corrupt links involving senior officers, the Met’s complaints department A10 is set to investigate.

By 1979 they had been reinforced by constabulary officers from Dorset and other forces in England and Wales. But the £4 million, four-year Operation Countryman was a disaster with the ‘Swedey’, as they were known, completely out of their depth. All they succeeded in doing was blight the careers of many devoted and promising officers.

These are the people Tennison must face and whose recommendations will see her transferred to Scotland Yard’s famous, but by now deeply corrupt, Flying Squad – one of the units they were set up to investigate. Watch this space for what should be the most spectacular part of Tennison’s rise to the top.