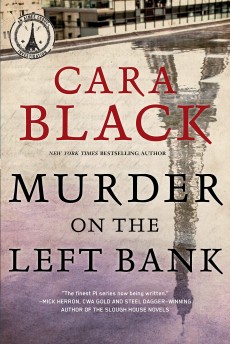 Murder on the Left Bank

When a young man is murdered for a notebook, his uncle Eric Besson pleads with PI Aimée Leduc to investigate.

When a young man is murdered for a notebook, his uncle Eric Besson pleads with Aimée Leduc to investigate. The notebook is the dying man’s confession. But its contents are nuclear, revealing the identity of Parisian criminals and dirty cops alike. The man is desperate that Besson gets it to Paris’s chief prosecuting attorney to bring down the Hand, the organised crime ring ruling the Paris underworld.
Eric enlists his nephew to take the notebook to ‘la proc’, but the young man never makes it. He is murdered on route and the notebook disappears. Now it is Eric’s turn to ask for help, and it is private investigator Aimée Leduc to whom he turns.
Aimée is reluctant; this is not her area of investigative services. Worse, her dead father’s name could be in the notebook. But that is why in the end she takes on the case, although it will bring danger far too close to home.
As I tend to ignore book blurbs and rarely research an author until after I have finished the novel in an effort to remain unbiased in my reflections, at first, I didn’t get why a PI novel published in 2018 was set in 1999. Although this is the first Cara Black novel I have read, this is the 18th book in the Aimée Leduc series. Presumably, Black rolls out a book per year, but does not want her protagonist to wrinkle in real time!
I am wary of the found-a-formula PI or police procedural; too often they are quantity over quality. However, as a Francophile, the Parisian setting drew me in. Unfortunately, my circumspection was justified. The story has an overwhelming sense of being formulaic; a PI who only specialises in computer security but veers into off-line crime with a handful of dangerous incidents. Her decision-making is impulsive, immature, at times stupid. If this is indicative of the last 17 books, that she is still alive staggers me.
The author makes a brave attempt to give her protagonist’s character a twist, but Aimée is just another feisty female whose private life bleeds into her work. The constant referral to her wardrobe choice is grating haute-couture advertising. This makes Aimée even more superficial and is irrelevant to the story. She’s not a character I can root for; she is far too woe-is-me, despite her go-get-it Louboutin/Chanel/Vuitton shell.
The plot is interesting but tested my suspension of disbelief; an untrusting PI who bleats to the world and his wife about a secret item yet cannot get the concerns about a friend’s daughter’s abduction out of her mouth. The number of times she conveniently ignores her phone is unconvincing. Her behaviour is at odds for a new mother.

Her side-kicks and the presumably regular cast are flat with generic voices. The baddies are stereotypes, and the main criminal is glaringly obvious. The descriptions of Paris are reasonable but lack atmosphere because they feel researched, not lived. The character descriptions are brown-hair-blue-eye-designer-jean hackneyed. However, the most irritating aspect of this story is the plethora of italicised French words. It is pretentious and underwhelming in its execution.
That said, this is a reasonably paced story with plenty of action, and the fashionable bonus of a feisty female protagonist. If haute couture and French expressions are up votre rue, Murder on the Left Bank is a binge-busting, fast, easy read.