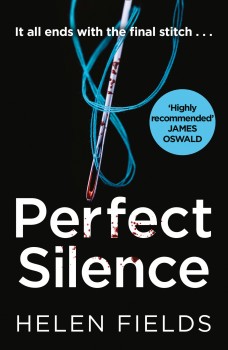 A serial killer is taking girls, skinning them alive and making dolls from their skin. DCI Ava Turner and DI Luc Callanach race against time to prevent the numbers of dead girls growing

Zoey is dragging herself, in agony, along a country road. Her strength is fading but she is determined to be found. Unfortunately, she is dead by the time a passing motorist stops. When examined by the police, the outline of a doll is found to have been cut from her skin on her front and back. The horrific thing is that this was done while she was alive and aware.

Another woman goes missing and in the pram containing her baby is found the doll, crudely made from Zoey’s skin. DCI Ava Turner is horrified by the cruelty and the circumstances surrounding the life of the dead girl. She and DI Luc Callanach set to work to try to save the next victim.

At the same time someone is carving Z into the faces of catatonic ‘spice’ users. The question is whether or not the two series of crimes are related.

This book is another triumph for Helen Fields, probably her best in my opinion. The descriptions of the fate of the victims, described through their eyes and thoughts, is harrowing and highly effective.  The progress of the plot is very skilfully handled. The ups and downs experienced by the investigating officers are lived by the reader. The emotion associated with the nature of the crimes and the effect that they have on the main protagonists increases the empathy for the way that these characters act and behave.

Edinburgh is once again a major part of the plot, described with clarity and real affection. It’s curious that a book describing such horrific crime can still produce a strong desire to visit the city.

The whole series is so satisfying and well plotted with excellent characters and written in a completely gripping style. Once again my life went on hold as I imbibed this skilful novel with the greatest haste.

I am surprised that this series of fiction has not yet been taken up by a television company. The plots would make a very worthy box set.