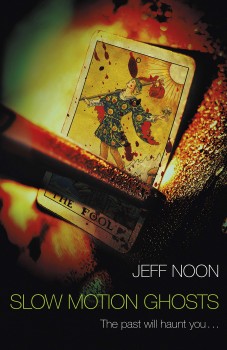 DI Henry Hobbes, ostracised by his colleagues for reporting a racial assault, is plunged into the obsessive world of fan worship by the ritual killing of a rock singer.

Jeff Noon made his name in the 1990s with almost dreamlike science fiction novels Vurt and Pollen. In this agonisingly PC first venture into the crime world he has produced a not dissimilar story which will endear him to Guardianista readers.

The former punk rock aficionado prefaces a noir procedural with a sort of updated Macpherson report, casually branding all 22,000 men and women of the 1980s Metropolitan police as racists thugs, dancing to the tune of the evil witch Thatcher.

Politics apart, Noon offers a fascinating glimpse into the obsessive world of pop culture and an understanding of the intoxicating magic of celebrity to a lost generation seeking heroes it can relate to.

In the aftermath of the 1981 Brixton riots in which he was injured, Detective Inspector Henry Hobbes is an outlaw to his colleagues. His crime was an unforgiveable breach of loyalty to a former friend and colleague who he reported for a vicious racist attack on a young black man. The officer concerned later hung himself.

Posted out of the way to the ‘sleepy, leafy’ borough of Richmond, he has hardly had time to absorb the open dislike of his staff before he is called to investigate the murder and mutilation of tribute band singer Brendan Clarke. The victim was an avid fan and collector of memorabilia of charismatic glam rock star Lucas Bell, who committed suicide a decade earlier, but still inspires fierce devotion.

At his last gig, Clarke, a not-quite New Romantic, paid tribute to his hero in a set comprised of Bell covers and also wore the mask of Bell’s most famous character King Lost. Hours later he was dead, with his face carved into a replica of the mask.

Comparisons with the androgynous, drug-addled, bisexual Ziggy Stardust are inevitable in the fictional King Lost, as well as shades of glam rockers Marc Bolan and Richey Edwards. Commercially exploitation and a dearth of genuine role models has ensured all three are now cult figures, with Bowie touted as one of the most influential musicians of all time, let alone the 20th century.

The investigation into Clarke’s murder leads the detectives to look into the earlier suicide of a Bowie-esque rock star as the links between the two are too obvious to ignore. The investigation leads to a cult-like group of misfit teenagers.

There is the usual conflict in the investigative team – a jaded, opinionated DS, an angry and possibly dangerous young DC and a raw, but willing PC learning the rules of a major investigation.

To track the murderer, Hobbes must cross boundaries as his investigation takes him into a twisted reality. Events move quickly, and as he deciphers a web of occult codes surrounding Clarke’s murder, and a disturbing childhood secret at the heart of Bell’s King Lost persona, Noon ups the stakes until the inspector finds himself facing mortal danger at every turn.

Rich in social and subcultural detail, the story has an edgy, melancholic feel as Hobbes, already at odds with the world he lives in and ahead of his time in many ways, digs into possible crimes of a decade earlier, which appear to have some bearing on the recent killing.
The main storyline is good, with enough mystery and emerging evidence to hold the reader’s interest. But Noon seems to have gone well out of his way to ensure there’s a requisite number of plausible, but almost interchangeable suspects.

Although the ending is weak, this is a reasonably well-presented plot with a more than original setting, if not exactly ground-breaking storyline.