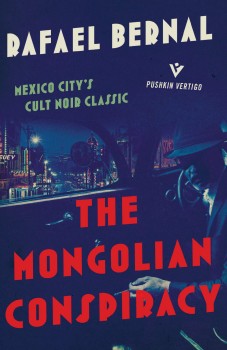 Filiberto Garcia, a Mexico City police hitman, is assigned to investigate when rumours are heard of an assassination planned for the US president on a forthcoming visit.

This re-issue by Pushkin Vertigo brings to English readers for the first time a classic originally published in 1969. It’s set in Mexico City in the mid-1960s, and features 60-year-old policeman Filiberto Garcia, whose career has primarily involved killing on behalf of his political masters.

Garcia is called in by his superior, the Colonel, and del Valle, a major figure in the government, who inform him of rumours picked up in Outer Mongolia of a conspiracy hatched by the Chinese to assassinate the US president during his planned visit to Mexico City in a few days. Garcia is known to have contacts in the small local Chinatown, and his superiors tell him to start asking questions.

In truth, Mexico City Chinatown is just a few shops, but Garcia has a name there as a friend, partly because of a gift of opium picked up during one of his operations. He asks about visitors and hears hints about drugs, but no assassinations. However, Marta, a girl from one of the shops, attaches herself to him as he leaves and Garcia finds himself having surprisingly romantic ideas about the girl.

When he returns to his flat with Marta after only a few hours on the case, Garcia finds a man lurking inside. Garcia kills the man and what he takes to be his confederate waiting in a car outside. Both appear to be Mexican; their role is unclear. Things get no clearer after he meets foreign agents Graves, from the USA, and Laski, from Russia, with whom he is told to cooperate, and whose main pre-occupation seems to be tailing each other.

Garcia’s world contains an innumerable number of things which he precedes by the adjective ‘Pinche!’ translated by Silver as ‘fucking’. This suitably conveys Garcia’s sense of disgust, exasperation, bafflement or sarcasm at what he sees about him, and includes the mystification he feels about his tender feelings for Marta, the repulsion he has for his past career, and the ridiculous complications of his current assignment. ‘Pinche!’ comes across as both an appeal to the gods, and a tongue-in-cheek comment on the situation.

An introduction to the book by Francisco Goldman and an endnote by Cocol Bernal give an interesting picture of the author and his life. The Mongolian Conspiracy is perhaps Rafael Bernal’s best-known book. He worked as a TV and movie scriptwriter and as a foreign diplomat, was a voracious reader of detective novels, and has influenced subsequent generations of Mexican writers.

The world-weary protagonist is a sympathetic character despite the number of bodies that inevitably seem to accumulate around him. Despite its age, the book is a great read and feels very modern, with humour as well as notes of tragedy.