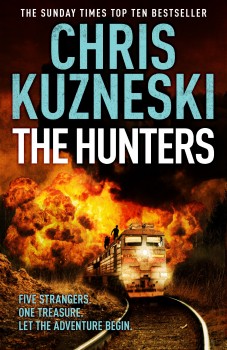 A team of highly-trained individuals are brought together from all walks of life by a wealthy businessman to locate and recover a vast Romanian treasure that has been missing for decades. However, the mission is a dangerous and sometimes explosive task.

The Hunters is the first in a new series by Chris Kuzneski. The story itself, although brilliantly thought out with a rich history of Russia, is very reminiscent of films like Mission Impossible and Ocean’s Eleven, so not an entirely original formula. A wealthy businessman brings together a team of experts including a computer nerd, a precise ex-military man, a gun-toting renegade, a bookish level-headed female and a strong acrobatic female.

Kuneski’s strength is in bringing his characters to life well, and building up the atmosphere and tensions between these very disparate personalities. However, the story moves fairly slowly and the action only really begins to pick up at the halfway point.

The team begins their mission in Russia, where they are tracking a Romanian treasure, estimated to be worth around 3.5 billion dollars, which was transported out of the country by rail just before the war. Tracing the journey of the train once it left Romanian soil becomes a mystery. Soon the team realise that they are not the only group searching for this treasure. A highly violent cult called the Black Robes are on their tail, threatening the whole operation.

The first half of the book is heavy with history and facts that can seem like a lot of information to take on board all at once, edging dangerously close to information dump territory. The pace is also fairly slow to begin with, as Kuzneski tries to establish his numerous characters. However, as the team and the Black Robes close in on the treasure, the story explodes into action.

Kuzneski is excellent at writing these kinds of action scenes, and they read as if you are watching it on the big screen. The only thing that can be tiresome if you are not a gun enthusiast is the extremely detailed description of each gun or weapon the team uses and what it can do. It didn’t really bring much more to the story for me, and I felt it was a bit of a distraction amid all of the excitement.

The end of the book obviously segues into the next book, leaving the reader on a slight cliffhanger but whether the reader gets that far will probably depend on how well they cope with the slower first half and the sometimes excessive detail.

Laura Parkin is recent graduate and book fiend, who lives in Bristol.