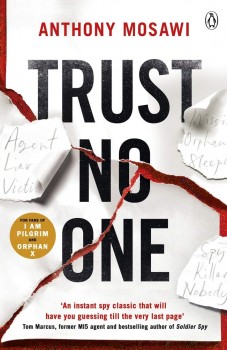 Sara has a handful of useless belongings and a polaroid photo of a man. She has nothing else, not even her memory.

1993. When the local police find ten-year old Sara Eden in a scum-filled bath in a filthy house, it initially looks like a serious case of neglect. Until they realise someone has subjected the girl to sensory deprivation.
Sara remembers her name, that she was born in Scotland in 1983, that her mother died during childbirth and her father was a tourist. Other than that, she appears to have lost her memory. A Walkman player, a few pieces of paper, a cheap necklace and a polaroid of a man she does not recognise with the words “don't trust this man” scrawled underneath are her only possessions.
Today. The man in the photo has never given up looking for her, but there is more than one man that Sara needs to mistrust. With GCHQ, MI5 and the military on her tail, she must keep her powers under the radar. With the clock ticking, that is going to be impossible.#
It is rare that I even check who the author is when I delve into my stash of to-review books. My role is to read what is between the covers, not rely on reputation, past performances or blurb to decide if a novel meets the criteria. If the writing is good, the plot holds water and the characters have flesh on their bones, the crime sub-genre is irrelevant to me, as is the author’s name and writing experience.
From the start, I sensed the author of Trust No One was making their debut. But because it started with a bang and promised a fun journey, I was prepared to forgive the bland and wordy writing. Unfortunately, although I managed to ignore the unedited feel, the story was disappointing too. It has all the hallmarks of a child let loose in a sweet-shop. Or someone who has an idea of the elements that go to make a thriller and has thrown them all in rather than cherry-picking those that send the story forward. Sadly, the result is a plot with too many holes and conveniences.
While I have no problem with non-linear plots, they must be clear and serve a purpose. Between a plethora of also-ran characters, main characters who do not leap off the page, and a lacklustre story, the non-chronological aspect of this book confused the fragile plot-threads. And by the halfway mark, the story had lost its direction.
Certainly, there is plenty of imagination, but because the narrative is in the tell mode, not show, the imagination doesn’t translate into the believable. Much is simply too far-fetched. From the ending, Trust No One reads as if it is the first in a series – or a lot of backstory turned into a long-winded prologue.
I did check the author out. This is his debut novel, but he worked in the film industry for some time. Presumably that is why this story reads like a wannabe Hollywood thriller. Trust No One has been pitched as high-concept and likened to I Am Pilgrim meets Orphan X. I cannot agree on the concept status or the compared-to stories, in terms of its execution. But despite that, I will read any follow-ons from this book to see if the writer hones his craft.