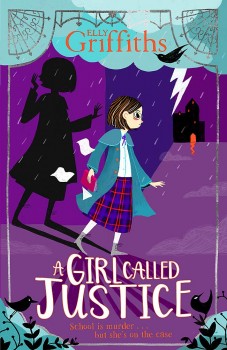 When Justice Jones arrives at her new boarding school, she fully expects to hate it, but then she discovers there’s a murder to get her teeth into, and suddenly things don’t seem quite so grim.

Justice Jones’ mother died of cancer a month before the story starts. He father is a busy criminal barrister in London and can’t cope with having a 12-year-old daughter at home, so Justice, who had previously been schooled at home by her mother, is packed off to Highbury House Boarding School for the Daughters of Gentlefolk.

Justice isn’t impressed by her first sight of Highbury House, standing out huge and stark, like Dracula’s castle, on the remote, inhospitable Romney Marshes of Kent. Much to Justice’s delight, the taxi driver who picked her up from the station lets slip that his brother, the local undertaker, recently had cause to visit the school. Justice’s interest is immediately piqued. She is an avid reader of the crime mysteries written by her late mother, and senses that there’s a secret at the school that she can get her teeth into. After all, anything is better than the ghastly food served up in the bleakly Dickensian school into which she’s been unceremoniously thrust.

School is totally alien to her, with its arcane customs, and its delight in games that are more like gladiatorial contests, and almost universal worship of Helena Bliss, the head girl. The staff are mostly extremely forbidding, from the brusque Matron, the hearty and overbearing games teacher Miss Thomas, and Miss de Vere, the glamorous but commanding headmistress.

It’s not long before Justice starts making discreet enquiries into the death of Mary, the servant girl, and when a mysterious note tells her to come to the supposedly haunted tower in the school grounds, Justice, certain that she’s onto something, goes headlong into danger.

Crime writer Elly Griffiths’ first foray into middle-grade fiction draws on the long-established tradition of boarding school stories from Enid Blyton to Robin Stevens’ Murder Most Unladylike series to weave an excellent tale of dark goings-on in the febrile atmosphere of Highbury House. Justice doesn’t know who to trust, and then when a second death occurs while the school is cut off from the surrounding area by a heavy snowfall, the stakes are immediately raised.

Justice is a likeable narrator, shrewd and capable. I enjoyed watching her gradually start to relate to an initially unfamiliar environment, as she takes her first tentative steps to forming a friendship with Stella, who’s at Highbury House on a scholarship. The post-war period of the early 1950s is well-captured, and the book has all the feel of Malory Towers and St Clare’s, complete with tuck boxes and midnight feasts of sardines and tinned fruit but with the added spice of dastardly behaviour and murder thrown into the mix. Griffiths tells a good story, and I thoroughly enjoyed the debut of A Girl Called Justice.