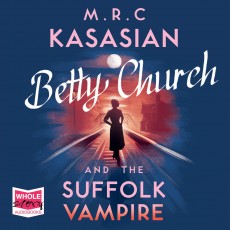 Betty Church and the Suffolk Vampire

Inspector Betty Church is not pleased to be posted to the sleepy backwater town in Suffolk where she grew up, but when a murder enlivens Sackwater, Betty is promptly in her element again.

The year is 1939. Inspector Betty Church, one of the few women in the police force of the day, is distinctly unimpressed when she’s packed off to the sleepy town of Sackwater in rural Suffolk, the only consolation being that she’s manged to wangle a promotion out of the move as well as keeping the job she was faced with losing as a result of another loss, that of part of her arm.

As Betty knows from having grown up there, not much happens in Sackwater and its motley crime fighting crew are hardly stretched. But that looks like it might change when Betty is called out to investigate a missing bench at the railway station and unexpectedly finds herself with a dead body on her hands – a well-dressed man with two puncture marks in his neck. Suddenly, Sackwater seems a little more sinister – and a little more interesting –  and Betty has something to get her teeth into, much like the murderer she’s now hunting.

Betty is the niece of the formidable March Middleton, who knows everyone who’s anybody in the town, and neither of them are above using a subtle mix of favours and blackmail to get what they want. I’m not familiar with MRC Kasasian’s earlier series, The Gower Street Detectives featuring the redoubtable Middleton and her guardian, the hugely intelligent and equally hugely obnoxious Sidney Grice, but I didn’t need to be to immediately get the flavour of both characters. There’s no prior knowledge needed to follow Betty’s adventures in deepest, darkest Suffolk, although I’m now keen to work my way back to the earlier stories.

Betty Church is faced with the absolute dregs of the Suffolk constabulary, incompetent, lazy and utterly eccentric, in a town where nothing ever happens. Except murder, of course. Betty is saddled with the sickly-sweet WPC Dodo Chivers, who talks like an eight-year-old but is occasionally capable of delivering a penetrating insight dressed up in her trademark childish language. The rest of Betty’s workforce comprise just about every stereotype possible and it’s nothing short of a miracle that any sort of policework gets down in her hometown, but despite the twin handicaps of her intellectually challenged colleagues and a missing arm, Betty is determined that Sackwater’s first serial killer will be brought to justice.

I was immediately taken by Kasasian’s amusing style, with a seemingly non-stop run of sharp asides and hilarious description from his clever, capable narrator. Betty is easy to like, as is the delightfully eccentric Dodo, and together they make an excellent team in this witty murder mystery with more twists and turns that the paths that run through the Suffolk marshes. Despite the humour, there’s a dark core running through the book and the music hall humour never quite descends into the threatened slapstick, although with the incompetent twins Lysander and Algernon – Sandy and Algie – it’s sometimes a close-run thing.

The plot is complex and it’s hard to see a pattern in the killings, and it’s in the plot that the book came close to losing me, as it ends with an extremely protracted reveal in which the characters discuss the plot in minute detail, just to make sure the audience has been keeping up – which I clearly hadn’t been by that stage. It was only the amusing narration that kept me on board at that stage.

There’s an element of cheat in the reveal, but despite that, I still enjoyed the book and would be very happy to read more of Betty’s adventures, although I doubt we’ll ever get to learn the true story of how Betty lost her arm. Emma Gregory’s narration was a delight throughout, conjuring up each character with consummate skill and handling a diverse range of character voices with ease.