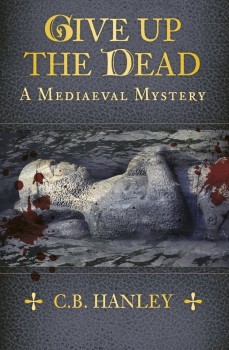 Give Up the Dead

Edwin Weaver joins the contingent of William de Warenne, earl of Surrey, as it marches for the Kent coast to prevent the reinforcement of Prince Louis’ invading French army. When a series of suspicious ‘accidents’ puts the earl’s life in danger, he soon realises the enemy is closer at hand.

Aussie-born CB Hanley, who holds a PhD in Medieval Studies specialising in warfare in the 12th and 13th centuries, has published non-fiction history for academic and general audiences, as well as a brilliant medieval mystery series.  She conjures up the 13th century with flair, combining detailed knowledge with imaginative and gripping stories covering all parts of a divided society which keep the reader guessing to the end.

In 1217 England is wracked by civil war. Rebel nobles, sickened by the misrule of King John, have invited Prince Louis, the Dauphin of France, to take the throne and he has brought an army to suppress opposition. With John’s death and the succession of the child king Henry III, many have re-joined the Royalist cause, led by the regent, that paragon of chivalry William Marshal, and Ranulf, Earl of Chester.

The devious William de Warenne, earl of Surrey, a royal bastard with a tenuous claim to the throne, has played both sides, first not opposing then backing Louis, changing sides in time for the key Royalist victory at the battle of Lincoln. Louis, safe in his stronghold of London, has summoned reinforcements and a great fleet is set to cross the narrow seas of the Channel. If the troops manage to link with the remaining rebels and the Dauphin’s army, England is lost.

In this fifth book in what has been a fascinating series, Edwin Weaver, son of the former bailiff of Conisbrough Castle in Yorkshire, one of de Warenne’s many holdings, has been summoned to join the earl’s units marching south to repel this second invasion.

Educated, mathematically gifted and logical, Edwin, a product of his monkish upbringing, is principled and naïve, with little understanding of politics or warfare. But he has been able to use his skills as an unwilling detective to bail his devious lord out trouble before.

When a series of apparent ‘accidents’ puts the earl’s life in danger, Edwin soon realises that the enemy may be a lot closer at hand than the French. But before he can solve the mystery, he must face not only a bloody battle, but also one that will take place in the waters off the Kent coast and the mouth of the Thames – something he cannot even imagine.

As the bodies pile up, Edwin, who has a surprisingly delicate conscience – hardly surprising with his monkish upbringing – is forced to decide how far he is prepared to go to defend his ungrateful lord, his beliefs and his country.

Hanley’s skill is to weave a credible story into a rich background of fact from a period about which most of her readers will know very little – and again she succeeds brilliantly. Her characters are varied and real, ranging from rough sailors and archers to the wrangling, ambition and confusion of England’s would-be noble saviours. In particular, the life and problems of noble pages, often faced with bullying and brutality but rarely varying from devotion to duty and absolute loyalty to their masters, are well explored through several of the minor players.

Interactions and conversations are natural, the tension mounting as her story builds to a satisfying conclusion both fictionally and historically, although she has taken a few liberties with the facts. De Warenne took no part in the brutal sea battle off Sandwich, just as he had managed to avoid involvement at Lincoln, but the horrifying description of the fight is all too real – and much of the background is explained in a series of factual appendices.

I have been fascinated by Edwin since his debut in Sins of the Fathers and this further development of his character promises well for the future. For fans of historical fiction this is just about as good as it gets.