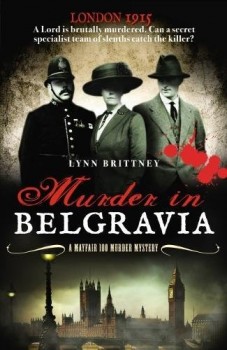 A dissolute Irish aristocrat is stabbed in his own bedroom. His wife refuses to talk to a male policeman. Chief Inspector Peter Beech and his specially-formed team must sift the criminal underworld of World War 1 London to find the truth.

Lynn Brittney’s imaginative Mayfair 100 series, set in London during the first world war, tells the story of the small team of professional policemen and educated women in solving crimes.

The team is the secret project of Commissioner Sir Edward Henry, considered one of the Met’s greatest leaders and innovators, who during his 15-year tenure from 1903, dragged the police into the 20th century. Among his reforms he was keen to bring women into the service – a move strongly resisted by the Home Office.

The war gave impetus to his idea. With most men away in the armed services, women took over all sorts of jobs hitherto denied them and in 1915 Edith Smith was sworn in at Grantham Borough as the first woman with full powers of arrest.

Those historical facts are cleverly exploited by Brittney. Mayfair 100 is the telephone number of the unofficial special unit set up by Henry to exploit the brains and skills of women to advance his argument for their inclusion in the service.

The unit is run by a former Guards officer, the son of a baronet, injured and invalided out in the early months of the war, and is staffed by a former Special Branch veteran recalled to service, a tough and good looking former Guards boxing champion PC and two remarkable, but distinctly upper class ladies, one legally qualified but not allowed to practise as a solicitor, and a doctor.

The team are anxious to prove themselves. Their chance comes when a dissolute Irish aristocrat is stabbed to death in the bedroom of his London home. His badly injured wife, a key witness and obvious suspect, will only speak to a woman about the unpleasant details of the case. What is she trying to cover up?

As Chief Inspector Peter Beech and his team investigate the murder, they must delve into the seedier parts of wartime London, facing criminal gangs, confronting the realities of both female and male brothels together with the spread of venereal diseases and unpick the supply chain of drug rings supplying heroin to the upper classes.

This strange cross between Downton Abbey and modern noir – the team are based in the Mayfair home of Lady Maud, mother of lawyer Victoria – also has a strong feminist message.

But this is no cosy. The themes are nasty and Brittney does not shy away from them. They are off-set by her likeable main characters, the emergence of the sense of empowerment women were beginning to feel, and the way her characters interact even though from very different backgrounds. The story highlights both the class system of the age and the way women were viewed in a male-dominated world.

The mystery is complex and gripping and the historical background and social information set it off perfectly. If there is a criticism it must be repetition. Having described her detective team’s actions, Brittney tends to go over them all again in almost daily debriefs. That may be part of procedure, but surely a good editor should have found a way around it.

And despite the feminist subtext, the two leading women characters are so lightly drawn as to be almost interchangeable. Both Victoria, who has history with Beech and Doctor Caroline Allardyce, who grew up with him and nurtures feelings for him, are strong enough in their own right to deserve better.

All round, though, this is a good introduction to what should be a fascinating series.