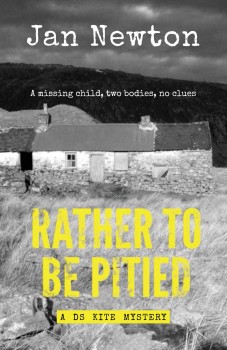 Rather to be Pitied

DS Julie Kite, settling into her new job in rural Wales, is faced with a murder mystery which will test her abilities to the full.

The second DS Julie Kite mystery does not disappoint. The genesis of its oblique title is explained on the final page of what is a smart and often edgy follow-up to Remember No More from a writer showing confidence and ambition. And it’s also good news for her publishers – a community co-operative set up to encourage and promote Welsh women writers. Manchester-born, Chilterns-raised Newton moved to mid Wales in 2005.

She has learnt one of the world’s most complicated languages – after much time spent at Brecon courtesy of the MoD, I can manage about five words – and a depth of research convinces with an authority which suggests no detail has been missed. Newton’s sheer love of the area and its insular, closed, largely Welsh-speaking farming communities, her ability to conjure the landscape – and Julie’s delight in it which I suspect reflects her own – is apparent from the first page. If you know the Brecons and the Cambian Hills, you’ll recognise it. If you don’t, you’ll soon pick it up. ‘Sense of place’ is a cliché that reviewers chuck around, but it was never more apposite than in this well thought-out, immaculately plotted story, told with an assured, astute and often humorous pen.

Newly-promoted Julie Kite has been only a few months in what she thought was sleepy mid-Wales and is already facing a second murder case. A body has been found by schoolkids trekking an old monks’ road.

That discovery sets in motion a complex plot. People are missing – a young mother, her son, and her next-door neighbour’s wife. And the harassed landlady of a B&B where the young mum had stayed seems to have mislaid her husband too! Add some ex-servicemen trying to overcome their PTSD by herding alpacas, a housing estate in Blackpool, Julie’s parents’ home in Manchester, plus plenty other convoluted factors and a diverse and well-drawn cast will keep you reading right to the end.

Both story and plotting are strong, examining the community through the eyes of a still relative incomer, and portrayed lovingly and beautifully. There’s a nice balance too between the meticulous steadiness of the investigation, the police interviews with their carefully crafted parry and thrust, and moments of breakneck action and drama.

Against this Julie’s personal life – her husband’s newly discovered passion for vegan cooking, her suspicion that their difficult past might not be laid to rest, her exchanges with Cam the horse, her phone conversations with her friend still involved in high-octane city policing and her relationship with her family – point up the sharp contrast between the urban and the rural lifestyle she’s now getting used to.

Ei waedlyd gwych, gwerth ei ddarllen! If you can work that out, you’ll not only get hours of entertainment, but you’ll also probably have solved Newton’s much-awaited next two plots!