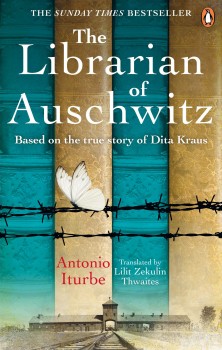 The Librarian of Auschwitz

The part-fictionalised story of Czech-Jewish schoolgirl Dita Polachova who spent years in the horror of Auschwitz-Birkenau where she administered a small library of smuggled books in the world’s strangest school.

If politicians and educationalists are as keen on countering the rise of neo-Nazism as they claim, this horrifying – yet at the same time life-affirming story of survival and courage – should become a fixture on the GCSE syllabus.

Spanish journalist Antonio Iturbe’s unforgettable and heart-breaking part-fictionalisation of the life from the age of nine to 16 of Dita Kraus, the real librarian and survivor of Auschwitz-Birkenau and Bergen-Belsen concentration camps, is a story anyone will find it difficult to forget.

Czech Jew Dita Polachova was raised in a loving secular home in Prague, an only child of book-loving parents. By the age of 14 a handful of tattered books, possibly the smallest library in the world, would help save her life by giving her a focus amid the horrors of the Auschwitz-Birkenau death camp.

Her life had begun to change in March 1939 when the Nazis invaded, put her lawyer father out of a job and evicted the family. In 1941 they were again evicted from a rented flat they shared with her grandparents and shared a room in an apartment in a part of the city once the Jewish ghetto.

In November 1942, 13-year-old Dita and her parents were sent to the Terezin ghetto, and in December the following year, on to Auschwitz where her ‘Jew number’ – 73305 – was tattooed on her arm. Dita and her mother were housed in one of the women’s barracks in the so-called ‘Family’ Camp BIIb – separate from the main killing facilities and built to fool neutral inspectors into believing Auschwitz was not an extermination camp.

It contained the children’s Block 31, a day centre to ensure the youngsters would not be in the way of the working prisoners – run by charismatic young Zionist Fredy Hirsch, who Dita had known as her sports instructor in Prague and later in Terezin, where as part of the administration he ran the department for youths and children. He was an inspirational educator who used a handful of tattered books smuggled into the camp to create a small oasis of relative normality.

But it didn’t save the children. The first transport from Terezin to the family camp was in September 1943. Each transport was allowed just six months. After that transport was exterminated in March, it was clear the December draft, which included Dita and her mother, would go to the gas chambers in June.

The death of Hirsch in March 1944 – he had been asked to lead an uprising to prevent an impending mass murder but was drugged by Jewish doctors who misjudged the dose to avoid a complete massacre – plunged Dita into a depression.

Somehow she found the strength to carry on even after her father died of starvation and illness at the age of 44 and Dita and her mother were among 1,000 women sent to a work camp in Hamburg, then on to Bergen-Belsen. Even without gas chambers, it was a killing machine of starvation and illness, particularly typhus. British troops who liberated Bergen-Belsen in April 1945 found piles of rotting corpses and thousands of sick and starving prisoners, including Dita, who had contracted the disease.

Again, her spirit ensured she survived, but she suffered yet another blow while in quarantine before their return to Prague. In June 1945, her mother became ill and died two days later, leaving Dita an orphan just before her 16th birthday. A few weeks after her return to the city, Dita met her future husband Otto Kraus, and recognised him as one of the instructors from the children’s block. They married in 1947 and moved to Israel with their young son and survivor friends two years later. After life in the Givat Chaim kibbutz, both later taught at a school for European Jewish refugee children.

Iturbe’s disturbing novel never claims to be anything more than a fictionalised account of real-life events. He never flinches from the harrowing brutality of life in Auschwitz, from the murder of the millions, the sickening violence of the camp guards, to the desperation which saw inmates turn on one another.

And overall there is the brooding black-uniformed presence of the Angel of Death, physician and ?SS-Hauptsturmführer Josef Mengele, that embodiment of Nazi evil. whose inhuman genetic research on subjects, primarily twins, saw him perform autopsies on living bodies and conduct many other unspeakable procedures. Mengele survived the war, fleeing to South America where he evaded capture for the rest of his life.

Dita’s heart-breaking, but ultimately inspiring story, is not told in linear fashion, with flashbacks to her cut-short childhood recalling all too brief moments of innocence before the Nazi invasion of Czechoslovakia. Although she is the main character, there are also chapters devoted to other prisoners – an essential reminder that every person had their own stories, many now lost in the ashes that found their final resting place in that hell on earth.

Despite the unimaginable horror Iturbe describes so vividly, there remain moments of hope and even beauty – a compelling reminder of the dichotomy of humanity.

This is not a story to enjoy, but most readers will feel, as I did, privileged to have learned about the bravery and humanity of Dita and many other ordinary people. In a touching afterword, Iturbe writes: ‘Until now, I hadn’t believed in heroes, but I now know they exist.’ This is the story of one.