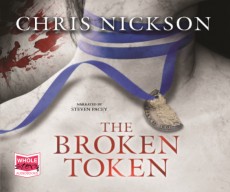 When Richard Nottingham, Constable of Leeds, discovers his former housemaid murdered in a particularly sickening manner, his professional and personal lives move perilously close to each other.

It's 1731. The hats are tri-cornered, you drink small beer if you know what's good for you, and no one has invented bin collections yet. Chris Nickson chooses the Georgian era to write this police procedural, and it's a fine thing. It’s long enough ago that red tape doesn't get in the way, plus avoiding the Victorian era so we can have a little more action between the sheets, as it were.

Richard Nottingham is the constable of Leeds, our hero of the novel. He is woken one morning to be told of two murders in the city, and when he sees the bodies laid out in a grotesque way in a filthy courtyard, he realises he knows both of the victims. The man is a visiting preacher, a guest of an important merchant in the city, and the woman he recognises too.

Once upon a time she had been a member of Nottingham's household, when she'd looked after his two young girls. The constable is not a wealthy man, but his wife had needed help after illness, and young Pamela had been like part of the family, until she'd got married and moved to the country. Nottingham must find out how she’s turned up dead back in the city, and why she had, from all the evidence before him, been working as a whore.

We follow Nottingham and his deputy as they work the case, and also back in their homes and their family goings-on. With pressure from the mayor to find the killer, but with twists and more deaths and few leads to go on, if they don't arrest someone soon their jobs may be at risk. And where is the half a broken token from the blue ribbon around Pamela's neck that Nottingham had given her one year for her birthday?

I have a confession to make – I'm not sure I've ever guessed a whodunit correctly before. But this one seemed very obvious indeed. Maybe it was a lucky guess. I felt slightly disappointed that I'd finally cracked a mystery, but it didn't spoil my enjoyment. I listened to the audiobook, which was narrated by the excellent Steven Pacey. He suits the Yorkshire accents, though he can pull off an array of voices, and overall, it's a real disc turner.

It was a captivating set up, with the family dramas nearly eclipsing the murders, and the Georgian era makes for a gritty, freeform investigation. Although my guess at the murderer was confirmed, and the constable got his man of course, the twist at the end took me totally by surprise, and it was excellent. You got me, Chris Nickson! I'll be after more Nottingham in Georgian Leeds.