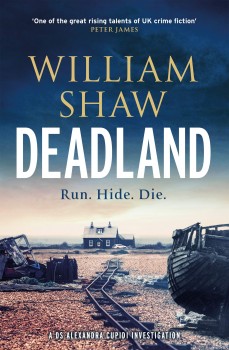 Two youngsters steal a phone – whose owner is willing to kill to recover it. DS Alex Cupidi, tasked with solving the mystery of a decomposing arm in an art gallery exhibition, uncovers a link between the crimes.

William Shaw is at his best as he confronts feisty Kent Detective Sergeant Alexandra Cupidi with what must be the strangest case she has ever faced – a decomposing arm inside an exhibit in an art gallery!

In what, as usual, is a moralistic but sympathetic look at the realities and challenges of modern policing, Shaw shines a harsh light on the darker side of British society, from its attitudes to disenfranchised youth, paroled sex offenders, migrant families, privilege and celebrity and explores how power affects how individuals are perceived and treated by others.

The unlikely stars of this cleverly structured apparently split narrative, are two young losers Tap and Sloth, one white, one black, both 17, both with little future and less hope whose life revolves around weed and petty crime.

The snatching of a mobile phone puts them in a situation far beyond anything they can imagine as the phone’s owner sets out to retrieve it – and is willing to kill to do so. They’re faced with a situation they have no idea how to handle, and their only hope is to try to hide in the bleak and inhospitable Kent marshes and coastline – which again form such a key part of the background as to become almost a character in their own right.

While the boys play a key part in this shocking and gritty cat and mouse tale, on the other side of the wealth divide, Cupidi faces the strangest investigation of her career – a severed limb, hidden inside a modern sculpture in Margate’s twee and exclusive Turner Contemporary gallery. No one takes it seriously – her police colleagues with their inevitable bad black jokes or even the artwork’s owners, celebrity dealers who appear to believe they’re above the law.

But as the case becomes more sinister, and Cupidi struggles with police politics and personal dilemmas, she can’t help worrying about the runaways – the same age as her own headstrong daughter. They’re alone on the marshes and are nothing more than pawns in someone else’s game. Two worlds, that of the outrageously rich haves of the art world and that of the young and hopeless have-nots, are about to collide.

Shaw expertly manipulates his readers’ emotions, engaging their sympathies in a many stranded and tautly constructed thriller whose diverse plotlines again demonstrate his ability to write about contemporary events with intelligence, well-drawn characters and sinister and divisive themes. From supermodels, millionaire investors, East End warehouses and the murky dealings of the art world to the personal lives of Cupidi and her team dealing with their own problems of single parenting, consent and guilt, all set against a background of  ‘efficiency’ cuts stretching police resources, there is so much going that even to hint at where the interconnected stories end up is to risk a huge spoiler.

Shaw manages the obligatory twists, turns and dead ends with the well-crafted style readers have come to expect from his earlier books Salt Lane, The Birdwatcher, and his Breen and Tozer series set in 1960s London.

Cupidi is developing into an interesting character. Her past has shaped her present – and the more readers see of her the more she is likely to grow on them. Other characters are just as well depicted, especially the two young losers, and it was nice to see the development of Cupidi’s young colleague Jill Ferriter, who, as well as her own problems, provides Shaw with the opportunity to offer some genuine police banter that balances the story which otherwise could become too dark.

Deadland is an ingeniously unguessable, often moving and always powerful story which brilliantly captures Kent and its social divisions and offers a realistic, if harsh, look at the inequalities of modern Britain.