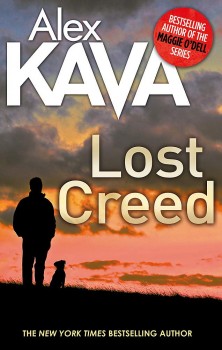 A child trafficking bust sets K9 handler Ryder Creed on a search for his missing sister.

Alex Kava’s 12-book series featured the brilliant, but brittle, FBI criminal profiler Maggie O’Dell. When Maggie could realistically go no further, she was absorbed into a new series whose main protagonist was Ryder Creed, the loner Marine search dog handler, injured in Afghanistan, who cares more for his rescue animals than for humans. As their paths continue to cross, both have felt – and tried to ignore – a growing attraction.
During a series of nationwide police raid on a child trafficking syndicate, Maggie stumbles on a possible clue which could explain what happened to Brodie, Creed’s younger sister, missing since she disappeared from an interstate rest stop 16 years before.

Her disappearance led to the break-up of his family and has haunted him since, so much so that his life is dedicated to his K9 business, rescuing abandoned dogs and training them for scent detection to search for the lost and missing. He joins the search that follows an arrest of a man thought to be a key player in the child trafficking ring and the hunt that follows is as gut-wrenching as are the answers Creed and Maggie uncover.

Kava has melded fact and fiction into a fast-moving, compelling and totally believable story. Details of the America-wide business of human, particularly child-trafficking, are blended with the importance of family, both real and surrogate, and what it can do to a family unit when someone goes missing; the rehabilitation of injured military personnel; and a touch of romance.

Her strength is to make all her characters believable. Creed’s mother, who has buried the partly self-induced loss of her family beneath a drive which has seen her become a nationwide TV star, and the tough but fair Detective Tommy Pakula are as key to the development of the plot as the protagonists.

Then, of course, there ar the dogs. Kava never gives in to a temptation towards anthropomorphism. Her dogs are just that. They’re brilliantly described with a real feeling for animals, and are in many ways the unsung stars of the show, adding as they do an extra dimension to the character of Creed and helping to develop that of his new recruit, the young ex-Ranger Jason, struggling both with his memories of Afghanistan and a prosthetic arm.

This is a fine story – in my opinion probably Kava’s best – which deserves every read and sale it gets. And I will be interested to see how she develops the new characters in her next story.