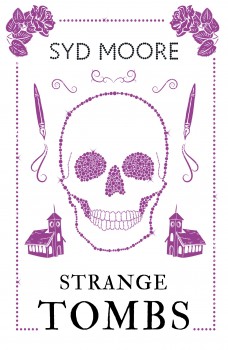 There's a mystery and suspense residential creative writing week at Ratchette Hall. It's at Halloween, so what could possibly go wrong? Well, murder for a start.

When Graham, the residential writing course administrator, is found dead at Ratchette Hall, his death is put down to natural causes. However, one of the course attendees feels that foul play is at hand and calls in reinforcements to investigate the death.

The reinforcements are Rosie Strange and Sam Stone, brought in from the Essex Witch Museum by Monty of MI5.

There are enough supernatural elements about the case to justify the inclusion of folklore experts. There's the legend of the crusader's tomb, whose effigy goes walking about under the right circumstances. Graham's body was found clutching a carved finger – was it fright at seeing an apparition that caused his death? Then there's the mysterious noises and howling coming from the nearby Witch Wood, which could be real or a YouTube prank. And then there are the tunnels in the local church …

Rosie and Sam must find their way through all these elements, including the various secrets and egos of the attendees, tutors and workers at the writing course. In the end it is down to Rosie's specialist abilities that lead the way to identifying the murderer.

This is effectively a country-house murder scenario, with enough hints of a supernatural element to keep it spooky in places. I do wish that Rosie would at least acknowledge that she has inherited the family psychic abilities, otherwise it's starting to make her look unobservant at best and stupid at worst. And Rosie is neither of these things.

I did find it difficult to keep all the course attendees straight in my head – they tended to blend into one, which was a pity. But with all that aside, this was a fun read. Rosie Strange is a great character and it's always a pleasure to spend time in her company.