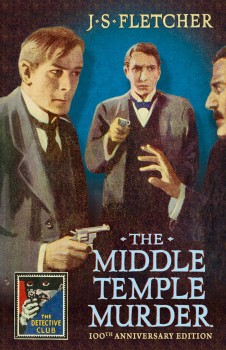 An unidentified elderly man is found bludgeoned to death in London’s Middle Temple. The police believe it was simple robbery, but journalist Frank Spargo, who stumbles on the death scene, joins forces with a Scotland Yard detective and a young barrister.

In this classic piece of detective fiction written more than a century ago, young sub-editor Frank Spargo is about to beget the most popular and enduring protagonist of the genre – the investigative journalist!

While almost no real journalist, with one or two outstanding exceptions, has ever fought and outwitted dim police, evil spies, vicious murderers and other criminal ne’er-do-wells or saved the planet, their literary counterparts do so on exponentially increasing occasions. And while anyone who can read spreadsheets or computer algorithms now calls themself an investigative reporter, there are few who have ever had to put their lives on the line in pursuit of a story.

The prolific JS Fletcher could not have known what he had started when he wrote one of the Golden Age’s earliest and most successful classics. Fletcher, also a fellow of the Royal Historical Society, studied law before turning to journalism. He earned his nickname of ‘The Dean of Mystery Writers’ with more than 200 books and short stories. One of these, The Contents of the Coffin, is resurrected and refined to play a key part in what is an intricate and intriguing early 20th century murder mystery.

Spargo, a young sub on The Watchman, a leading Fleet Street newspaper, leaves the office in the early hours of the morning after the final London edition has been ‘put to bed’ and the presses are rolling. Passing through the Middle Temple, that strange lawyer’s enclave between ‘The Street’ and the River Thames, he stumbles on the body of an unidentified elderly gentleman who has been bludgeoned to death.

Despite the incongruity of the setting, the police soon conclude this was a case of robbery gone wrong. But Spargo, who senses a scoop, joins forces with a Scotland Yard detective and a young barrister, whose address was the only item found on the body, to solve an intricate and intriguing mystery.

Fletcher’s seminal work may be one of the most original crime novels ever written. Not only are the protagonists ‘normal’, rather than the stylised upper-class detectives such as Holmes and various aristocrats so beloved of other authors of the era, it also set the style for what became the procedural. The story is revealed bit by bit as facts become available in a logical sequence that never stretches the reader’s credulity, while allowing for plenty of twists and turns along the way.

A complex plot is full of false leads, suspicious deaths and a small army of suspects who make guessing the identity of H in Line Of Duty look like a child’s ABC! So many characters turn out to have false identities that the reader begins to distrust all appearances. There are subtle indications to the killer, but Fletcher skilfully holds back the reveal until the very end.

The story’s main interest is the puzzle itself. None of the characters are that compelling, although some peripheral, charmingly eccentric old fogies and an almost staged and chivalric love interest do offer gentle distractions. The settings also play their part: the West Country small-town pub full of ancient regulars; the smoky, chaotic journalists’ club most Fleet Street old boys could name; the ancient Queen Anne Temple lodgings; the wild and lonely north Yorkshire moors all serve to underline and enhance the main plot.

It is well written – although, of course, the style is now dated – ingenious and complicated. Narrated in the third person, all the action is seen through the eyes of the main character, or what others say in his presence.

This unpretentious style allows the reader to stay abreast of and involved with the story. There’s no Holmes or Poirot, summing up the deductions no one else has the ability to work out, just a step-by-step resolution using clues to be gathered along the way.

This is a fine book, which well deserves its re-appearance and is a welcome break from the often frantic and unreal activities of the sub-genre it spawned.