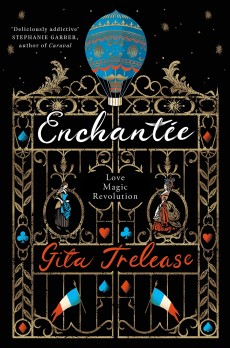 1798. Paris is on the brink of revolution. Camille Durbonne, struggling to pay food and rent, plays a dangerous game on the filthy streets and in the glittering courts.

Paris in 1789 is a city of contrasts. In the filthy, labyrinthine streets, the poor live as best they can, thieving, cheating and selling themselves for enough money to buy bread. But in the glittering court at Versailles, the aristocrats entertain themselves with every possible excess, gambling and drinking, while King Louis XVI ignores the growing unrest in his city as the price of bread rises ever higher and his queen, Marie Antoinette, amuses herself by pretending to be a poor shepherdess.

Seventeen-year-old Camille Durbonne lives in rue Charlot with her younger sister Sophie and her brother Alain. Each day is hand to mouth for them, as Alain gambles away every livre Camille brings home, instead of spending it on food or their greatly overdue rent. Their parents died of the pox, leaving them destitute and Sophie scarred and ill. Camille has to rely on the magic she learnt from her mother to give base metal the illusion of being money. The magic fades quickly, though, meaning that Camille has to walk further and further each day to find a shopkeeper who won’t recognise her.

One of these trips is enlivened when Camille helps rescue a runaway balloon, with its three aeronauts desperately trying to avoid a crash. Lazare Mellais, the pilot, invites Camille to visit them at their workshop. He’s handsome, charming and Camille wants to meet him again, but when she does, she’s carrying the bruises from her brother Alain’s drunken attack on her when his demands for more money failed to produce enough to satisfy his ever-increasing debts. Lazare is horrified, but Camille passes them off as an accident. Then, when Alain ransacks their rooms and takes everything Camille and Sophie have left, she’s forced to work more dangerous magic in the form of la glamoire, changing not only her clothing, but also her own image into something of ravishing beauty. But the glamour brings its own dangers …

Camille is transformed into Cécile Descharlots, Baroness de la Fontaine, and attends Versailles, where she meets a group of charming young aristocrats: Aurélie de Valledoré and her friends the Marquis de Chandon and his lover, the dashing cavalry officer the Baron Foudriard. But dark things lurk in the shadows of the king’s court, in the person of the handsome and dangerous Vicomte de Séguin who sets his sights on Camille, disguised as Cécile. Camille is warned by Chandon that Séguin cheats, and the stakes climb ever higher in the game Camille is intent on playing.

Enchantée is a darkly engaging romp through the streets and palaces of a France that is teetering on the brink of revolution. The use of la magie, as Camille knows it, lends an extra dimension to a world where the glamour of the court at Versailles is a hangover from the days of the magicians that the Sun King, Louis XIV, ended up persecuting even though they had helped to bring its splendour into being. That glamour is fading now, as Camille’s enchantment fades each night, leaving her drained and exhausted, but determined to continue, first to pay the rent, and later to help her and Sophie rise out of poverty to a better life.

Gita Trelease paints an accurate picture of a deeply divided France, where aristocratic landowners drive up the price of bread while the poor starve. Her characters are an engaging bunch, but gradually it becomes clear that there is more to both the charming Chandon and the suave, knife-sharp Séguin than is first apparent, and Camille’s games take on an added dimension as she tries to work out whether it’s her or her alter ego the beautiful Cécile that Lazare is interested in.

This stylish YA historical thriller is as deeply seductive as la magie that Camille weaves so expertly. I was torn between wanting Camille to continue her dangerous use of glamour so I could see more of her alternate life at Versailles and shouting at her to end the dangerous game that was draining her of life and vitality. Enchantée is as charming as the title suggests, but with a dark and brittle edge, a constant reminder that when the surface glitter starts to fail, darkness will soon prevail.