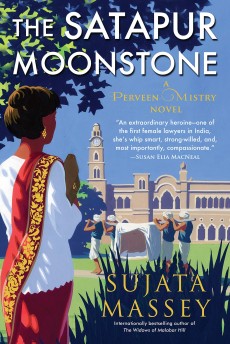 Lawyer Perveen Mistry is selected to advise on the education of a young maharaja in the tiny princely state of Satapur and finds the boy is at the centre of a power dispute.

Perveen Mistry is something unusual in 1922 India: an Oxford-educated Indian woman qualified as a lawyer. So when the British Raj need to find someone to penetrate the purdah which complicates discussion with the dowager and widow of the late maharaja regarding the education of his ten-year-old successor she is an understandable choice.

Mistry’s report will form the basis for action, to be implemented through Colin Sandringham, the local Raj agent. Sandringham is supportive but Mistry enters the palace alone. Immediately she becomes aware of a bitter dispute between the dowager and widow over the young maharaja, and much else.

A shadow also lies over the palace; there have been two recent fatalities, firstly of the young maharaja’s father from cholera, and then of his elder brother, said to be an attack by a leopard or a tiger. Besides the squabbling women, the maharaja’s uncle Swaroop and the court buffoon, Aditya, make their opposition to the Raj and to Mistry in particular very clear.

Mistry’s feeling of alarm is elevated several notches when a pet monkey is found poisoned after apparently eating a dish Mistry has discarded. Mistry concludes her report and departs, having informed both women but satisfied neither of them. Events at the palace, however, have quickly developed to a crisis, and Mistry faces further challenge if tragedy is to be averted.

This is the second tale featuring Perveen Mistry, who makes an interesting subject as a pioneer female lawyer, and a supporter of Gandhi too, although she is wise enough not to shout that about. We meet other characters struggling with prejudice: a couple of different religions cut off from both families for marrying outside the faith, people of mixed race, and a man who lost a foot after a snake bite.

The reader can deplore the strict and often cruel social mores of the time, and the restrictions placed on the women of the Zenana too, although the women at the summit of Indian society led pampered lives and I found it difficult to find much sympathy for their problems. Massey is well informed about the social formality, both a constraint on efficient operation and a terrible waste of effort, but at the same time undeniably exotic from this distance.

The author includes plenty of detail which illuminates the views of different sections of Anglo-Indian society: Parsi and Muslim, Hindu and British, the clash of cultures and the points where they agree. Less than 25 years before Indian independence, it feels like a very distant world. Mistry is a spirited investigator in a situation full of challenge and she brings the history to life.