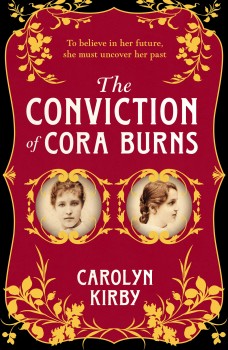 The Conviction of Cora Burns

Cora Burns, born in a prison and raised in a workhouse, has always struggled to control a streak of violence. A new life as a servant in the home of a scientist gives her a chance of a future, but she soon suspects that she, like a young girl she has befriended, are subjects of a living experiment.

Carolyn Kirby’s utterly engrossing debut raises questions about the origins of violence, nature versus nurture, madness and the sinister exploitation of the under-privileged in the name of ‘enlightened’ scientific experiment.

This convoluted tale involving workhouses, prisons, lunatic asylums and the posh Victorian home of a wealthy self-styled ‘scientist’ will exercise the reader’s mind to its fullest extent as they follow the fortunes of Cora Burns, a young woman who has always had to struggle to control a streak of violence.

Set in Birmingham in the closing years of the 19th century, this is as much a work of social and moral commentary as it is a story of lust and violence. For Cora, born in a jail to a mother she has never seen and then raised in a workhouse, to believe that she has a future, she must uncover her past which is haunted by vague memories of a terrible crime she may have committed in company with a ‘friend’ who was almost her double.

When she begins what she hopes is a new life working as a servant in the house of scientist Thomas Jerwood she is still troubled by her own propensity to violence. Here she befriends a young girl, Violet, who appears to be the subject of a living experiment. But is Cara also the subject of Jerwood’s observations – and if so, why?

Kirby melds a unique and gripping historical thriller and a compelling protagonist with realistic period detail of Victorian Birmingham to produce a story which owes more than a little to the Dickensian tradition of using fiction as a cover to present otherwise what, in the period, would be seen as controversial social reporting.

This tale of loss, ‘doubleness’, unacceptable exploitation and meddling with its memorable exploration of nature versus nurture, with its difficult questions on the origins of violence, is hardly an easy read. But enjoy it for what it is – and look forward to Kirby’s next effort. She’s a talented writer, with the courage to tackle the most difficult of subjects.