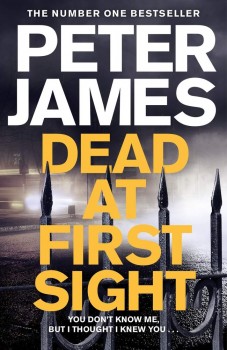 A woman’s apparent suicide leads Detective Superintendent Roy Grace into the world of internet romance scams – and a gang willing to kill anyone who threatens to expose them.

Former head of Sussex CID, Kevin Moore, says the force’s current detection rate – less than one in ten crimes solved and at its lowest-ever level – is woeful. It’s hardly a wonder, as many senior ranks, at least according to the credits at the end of James’ 15th Roy Grace novel seem to spend more time advising the CWA Diamond Dagger winner than they do on the job!

Their advice has provided him with the background for his meticulously researched procedurals and the problems, inner thoughts and attitudes of real detectives which make his stories so compelling.

James’ hero, Detective Superintendent Roy Grace, head of Major Crime for Sussex, is hardly the most thrilling man on the beat. Nor, thankfully is he the most damaged by drink, drugs or misery. His biggest problems are his politically correct, acidic, pushy and condescending Assistant Chief Constable and his eldest son Bruno, who he is trying to build a relationship with after a 12-year estrangement.

An almost normal policeman’s home life – he and his wife Cleo somehow manage to survive happily despite not spending a great deal of time together – makes him one of the most believable fictional detectives and offer a stark contrast to the grim subjects his creator relays.

A retired British Army major waits at London airport for his German love to arrive. Across the Atlantic, a former NYPD detective waits in a bar in Florida’s Key West for his first date with the woman who he believes is his soulmate.

Both are about to discover they’ve been scammed out of almost every penny they have – and that neither woman exists. Both are victims of the cruel worldwide business of internet romance scamming which frequently targets older men and women, looking for a second chance at happiness.

Meanwhile, a wealthy divorcée plunges from an apartment block in Munich in suspicious circumstances. In the same week, Grace is called to investigate the suspicious suicide of a woman in Brighton.

As his investigations continue, a handsome, gay motivational speaker discovers his identity has been stolen and is being used to scam 11 different women. His discovery comes in dramatic fashion with a phone call from one saying: ‘You don’t know me, but I thought I knew you.’

That woman is the supposed suicide Grace is investigating and his enquiries lead him into a global empire of clever, cruel internet scams and the willingness of the fraudsters to protect their lucrative business from anyone who threatens to expose them by whatever means they can – including murder!

The storyline is so current and the scale, plus the often-life shattering implications for the victims of these crimes, makes this both a page-turner and a real eye opener as James offers a thorough, and quite technical in places, exposé of the gangs’ methods and operations.

What makes him so successful is that, like much of police work itself, there is relatively little of the violent action so beloved of mostly American writers – although the contract killer Tooth makes a reappearance. There’s not too much suspense, just a steady working through facts to produce a satisfactory solution.

It’s yet another superb procedural from James. What a pity that Grace isn’t real and can’t lend his methodical skills to a police force which clearly so badly needs them!