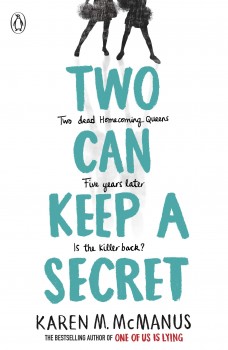 Two Can Keep a Secret

When Ellery and Ezra Corcoran arrive in the small town of Echo Ridge, Ellery is determined to uncover its secrets, including the disappearance of her aunt 23 years ago,

OK, I’ll admit it, I’ve been reading American teen YA books for years but have never really understood what on earth the frequent references to ‘Homecoming’ were about, other than the gut feeling that it was a way for popular kids to parade their popularity and enhance their sense of social entitlement. I’ve now looked it up, to discover that it’s a tradition of welcoming back former students and celebrating the school. This usually takes the form of a big party, but in the small east coast town of Echo Ridge, homecoming is dangerous.

Five years ago, popular Homecoming Queen Lacey McDuff went missing and was found murdered, and that wasn’t the first disappearance that Echo Ridge has had to come to terms with. Ellery Corcoran and her brother Ezra know that their aunt Sarah went missing 23 years ago aged 16 but they know nothing about her or what happened as their mother, Sadie, has always refused to talk about. They have come to Echo Ridge to live with their aunt while Sadie is in rehab, and Ellery is determined to use her time there to find out what happened to her aunt, and she intends to put her obsession with true life crime to good use. Ezra, more laid back then his sister, seems happy to support her.

Malcolm, whose brother Declan was one of the main suspects in Lacey’s disappearance, likes Ellery and is as keen as she is to get to the bottom of what’s going on in Echo Ridge as strange messages and gruesome dolls start turning up, with not so veiled threats making it clear that homecoming is a dangerous tradition in that town.

Two Can Keep a Secret builds on the success of Karen MacManus’ debut, One of Us is Lying. There’s a distinct flavour of the Scooby gang as the teenagers set about uncovering the secrets of a town that doesn’t want to talk. The hit and run killing of a much-loved teacher hasn’t helped, either, as no one came forward to accept responsibility, and Ellery adds that to the list of things she wants answers to.

The pesky kids have a lot to get to grips with and at times I floundered a little, despite the chapter headings signalling whether it was Ellery or Malcolm who was narrating each section. I also felt slightly adrift in the timescales on occasion, but despite that, this is an engaging look at the storm kettle pressures of small town American and the mystery of two possibly linked disappearances widely apart in time. And then when a third girl goes missing, the stakes suddenly get even higher.

I liked the layers within the story, and the complex mix of hot emotion and cool deduction. The teens are a likeable bunch, with the exception of the inevitable jocks and princesses, and the reveal, when it came, did catch me by surprise as I’d been looking in the wrong direction altogether. The motivations all made sense and the story moved along at a good pace, switching narrators to drive the story along. This is an excellent teen mystery, with some real depth at its heart.