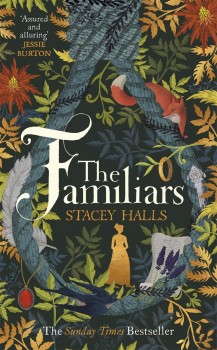 1612. Fleetwood Shuttleworth, the mistress of Gawthorpe Hall, is pregnant for the fourth time. Her previous three pregnancies have all ended in miscarriage. Fleetwood needs the help of young midwife Alice Gray, but in an atmosphere of suspicion and fear, Fleetwood stands to lose her friend, her baby and her life.

The year is 1612, and under the auspices of King James 1, a growing fear of witches is creeping over England, reaching its height in Lancashire, resulting in the trial of nine women and two men at Lancaster Assizes.

The story of the Pendle witches is one I feel I’ve known all my life. As a child, I used to play on Longridge Fell near Preston, and look over at the brooding presence of Pendle in the distance. At school, we read Robert Neill’s fictionalised account in Mist Over Pendle, which cast local magistrate Roger Nowell as the romantic lead, and I promptly went on to devour Harrison Ainsworth’s classic The Lancashire Witches, so when I saw that Stacey Halls’ debut The Familiars was set in an area I know well, I was on board from the beginning.

Seventeen-year-old Fleetwood Shuttleworth is mistress of Gawthorpe Hall. She’s in love with her husband Richard, who is desperate for an heir, and although Fleetwood is pregnant for the fourth time, her previous three pregnancies have all ended in miscarriage. She is equally desperate to provide the child Richard wants, but her faith in her husband is rocked when she finds a letter written to him by their physician that indicates that any further pregnancy would put her life seriously at risk. Fleetwood is shocked that Richard has said nothing of this to her, and she’s determined to do all she can to bring this pregnancy to a happy conclusion.

When she meets a local woman in the woods, Fleetwood is drawn to her, especially when she discovers the woman is a midwife. She engages Alice Grey’s services and won’t be persuaded to use anyone else. But when Alice is caught up in the witch frenzy that’s sweeping through the wild Lancashire moors, Fleetwood is determined to save her friend, as without Alice, Fleetwood fears she will lose the baby – and her own life.

Stacey Halls’ tale is told from the perspective of Fleetwood, married at the age of 13. She’s intelligent, bold and not easily cowed, even when it comes to going against her husband’s wishes. This isn’t her first marriage, though. She was married at the age of four, but the marriage is later annulled, and there is a suggestion that she had been the victim of abuse. Her relationship with her mother is not an easy one, and it’s not hard to see why Fleetwood detests both her mother and her former home.

The story is populated by real people. Fleetwood did exist and was mistress of Gawthorpe Hall in 1612. Roger Nowell was the prosecutor at the Lancaster Assizes trial. The accused women and men all lived – and died – in a deeply superstitious age. Halls’ depiction of Nowell is very different to that of Neill. He comes over as a self-serving man, determined to ingratiate himself with the king by pandering to his obsession and delivering a successful mass prosecution. He relied a lot on a nine-year-old girl, Jennet Device, who was one of the main witnesses for the prosecution, but there was also a morass of confession and accusation flying around between the two main families caught up in the witch-hunt.

Halls perfectly encapsulates an air of brooding menace and weaves it throughout the book so that it surrounds Fleetwood like the greasy stench of tallow candles used by the poor and the thrifty. The description of life at Gawthorpe Hall and the surrounding area is redolent with period detail, from the meals on the table, to the lawless taverns in the villages that clustered around the foot of Pendle Hill. There are hints at deeply held superstitions, such as the practice of entombing cats in the walls of a dwelling to protect against harm, that told me that Halls had done her research well.

I was thoroughly engrossed in Fleetwood’s story, hoping against hope for a happy ending for her, although as the story progressed, that seemed more and more unlikely. This is a stunning debut from Stacey Halls that gets deep under the skin of a time in which an accusation from a neighbour might be enough to send a woman – or man – to the gallows. Historical fiction doesn’t get much better than this.