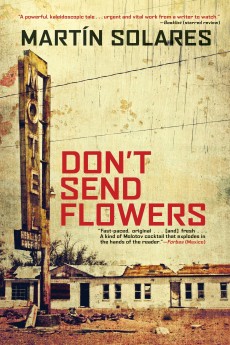 When Cristina De Leon is kidnapped, her wealthy father recruits ex-cop Carlos Trevino to get her back. Given that she is probably in the hands of one of the murderous local gangs, his chances of survival don’t look too good.

A recent addition to the ‘narco-lit’ emerging from Central America, this book is set in a Mexican gulf state where law and order has completely broken down. The city of La Eternidad was once promoted as a holiday paradise, but its proximity to the border has made it attractive to those moving narcotics. The gangs moved in and have extorted everything worth taking, leaving local residents poor and terrified.

De Leon is one of the few rich men left in town, desperate to get his daughter Cristina back from her kidnappers. At the suggestion of his friend, the US consul Don Williams, his bodyguards are sent to grab Carlos Trevino, who is living a few hours south. Trevino was once a local cop and well-liked as a useful detective, but was run out of town after a dispute with the Chief of Police, Margarito. Trevino is not keen but is bribed and threatened into cooperation.

Despite several considerable constraints (not least that Margarito has threatened to kill him if he shows his face in town) Trevino demonstrates his detective skills and makes quick progress. His deductions about Cristina’s captor lead him into a site run by Les Nuevos, a military-style encampment where murder is commonplace. He is lucky to emerge alive, but has arrived at a solution to his problem.

Unfortunately, he is forestalled before he is able to fulfil his contract. In part two of the book the focus shifts from Trevino to Margarito. After years of betrayals and the most cynical exploitation of his post, Margarito is being dismissed, and replaced by his son, who despises his father. Margarito has devised one last plan to exit with some cash, but things slide out of control.

From the perspective of nice, quiet UK, life in La Eternidad is difficult to imagine: neighbours killed and tortured, gangs demanding anything they see, the police reliable only in the sense that they act exclusively for their own benefit. Survival calls for quick wits and a good deal of luck. That Trevino manages to maintain coherent thinking while under such terrible threat makes him an impressive protagonist.

His virtual disappearance in the second half of the book does come as a disappointment. Margarito steps into centre stage, but as his years of misrule are revealed, the reader becomes increasingly aghast at the sheer greed of the man and the absolute lack of any moral sense.

Compared to Elmer Mendoza, a comparable author whose books have been reviewed here over the last few years, Solares is less of a challenge to an English-speaker and his detailed background helps make sense of the breakdown in civil society. In Trevino he also has a great detective, standing out as incorruptible and competent in a quagmire of sleaze.