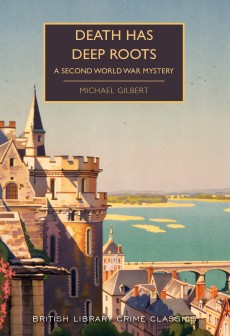 A former French Resistance fighter is on trial at the Old Bailey for the murder of her wartime British SOE controller. Her hastily assembled defence team believe her innocence can only be proved by retracing events that happened in Nazi-occupied wartime France.

In 1947, Michael Gilbert, who had escaped a prisoner of war camp and trekked 500 miles through Italy to re-join his regiment, was accepted by a prestigious London law firm  in Lincoln’s Inn, eventually becoming a partner and practising until retirement in 1983. Somehow, he always found time for his prolific writing – 30 novels, more than 150 short stories, stage, radio and television plays – during the commute by train from his Kent home to the office.

The key was also a clue to his success as an author, always preparing a thorough synopsis before starting to write, and as he unashamedly admitted, taking a latish train – and travelling first class! This attention to detail saw his thrillers, courtroom dramas, classical mysteries, realistic police procedurals and espionage novels rank among the best of British crime writing in the second half of the 20th century.

He was an exceptionally fine storyteller, both witty and a meticulously plotter and never afraid to innovate where he felt it could improve his work. Unlike other writers in the genre, Gilbert did not make use of a single recurring character, choosing instead to introduce characters who would appear in major or less important roles in several stories to give both continuity and stability.

Thus Inspector Hazlerigg, a star in his own right, appears in a support role here. Others who were to surface regularly include the shrewd veteran solicitor Rumbold and his lawyer son Nap, ex-Commando Angus McCann and the irascible, unpredictable King’s Counsel Hargest McCrea, all contributing to a complex storyline and extending the range of Gilbert’s work.

Nor was he afraid to experiment. What starts as a perfectly written and quite gripping courtroom drama with much emphasis on psychology and legal technique, suddenly merges with a thriller involving maquisards and collaborators from the Nazi occupation of France, gold and currency smugglers, all set in the febrile atmosphere of post war France where former Resistance colleagues literally fought each other over its political future.

Victoria Lamartine, a former Resistante, now employed at a Soho family hotel is on trial at the Old Bailey for murder. She is alleged to have killed Major Eric Thoseby, her former wartime controller, with a single knife blow using a technique developed and taught by the Maquisards.

While the crime was committed in England, its roots are buried in a vividly depicted occupied France. The police have heard rumours that Thoseby fathered Lamartine's now dead son and the prosecution insist his death is revenge for his abandonment of them and her subsequent arrest by the Gestapo.

The near-locked room nature of the setting for the present crime reinforces their idea that they have an open and shut case and the best Lamartine can hope for is the mercy of the court to save her from the gallows.

She has other ideas, sacking her defence team and employing Rumbold, who in turn engages McCrea. Both realise the only hope of acquittal is likely to be found in France, and Nap Rumbold, his father’s junior, is despatched to the Basse-Loire region around Angers to explore the recent past for possible clues.

As the inexperienced amateur detective tries to establish identities and motives, his own life comes under threat as he exposes, with some help from old contacts in the Surete, a cross-Channel currency smuggling gang.

Gilbert effortlessly and seamlessly fuses the tensions of Nap’s investigations with the formality, manners and suavity of the courtroom. His writing in this complex, clever, yet beautifully presented and explained story is on a par with anything Agatha Christie produced.