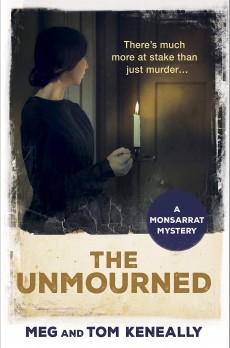 The brutal superintendent of a prison has been murdered and the prime and only suspect is a fiery Irish prisoner. She will hang unless ticket-of-leave gentleman convict and amateur detective Hugh Monsarrat and his clever housekeeper Hannah Mulrooney can find the real killer.

When Booker Prize-winning author Tom Keneally – his magnificent Schindler’s Ark translated onto the screen as the Academy Award-winning film Schindler’s List – gets together with his daughter Meg, a former journalist and radio producer, you expect sparks to fly.

And so far their series featuring ticket-of-leave gentleman convict Hugh Monsarrat has not disappointed. As much an education in Australia’s turbulent early history – Keneally has also authored three non-fiction books on this subject – as murder mysteries, they are at the same time charming and threatening, light and brutal and very much connected to the convicts and early settlers who made the country what it is today.

And the connection for this story, partly based on truth, is personal. Meg Keneally’s great, great grandmother Mary Shields, herself arrived in the country as a convict, transported from Limerick for stealing clothes!

Monsarrat, recently arrived from Port Macquarie with his fiercely loyal, mentally alert and sparky Irish housekeeper Hannah Mulrooney, who lived through the 1798 Irish Rebellion before her own transportation, has become an unofficial advisor on criminal and legal matters to the governor’s secretary.

When Robert Church, superintendent of the Parramatta Female Factory, a fancy name for what is little more than a prison operated under appalling conditions with shortages of food, clothing and medicine, is murdered with an awl stuck into his eye and brain, Monsarrat is charged with uncovering the truth of the killing.

Church was a truly unlovely man, skimming the rations, a drunk dealing in illegal rum and unfailing brutal with those under his charge. But the most enjoyable part of his job was his access to young convict women who had no means of complaint when he forced them into sex.

But British justice must be seen to be served and fiery inmate Grace O’Leary, who has made it her mission to protect the women from his nocturnal visits, is a convenient chief suspect, despite being in solitary confinement at the time of his death. Unless Monsarrat can prove otherwise, she will hang – a fate to which she seems almost indifferent.
Accompanied by Mrs Mulrooney, Monsarrat visits the Female Factory, where he takes depositions from prisoners and tries to persuade O’Leary to take an active part in her own defence, while the shrewd Hannah Mulrooney tries to strike up some sort of relationship with several prisoners whose evidence could be key.

Both believe O’Leary is innocent, but in this they are alone, so to clear her they must find the murderer. Many hated Church and his unmourned death is welcomed by most.

The Keneallys’ evocation of place and time, attitudes and early colonial life is magnificent. There’s not that much mystery, with the murderer signalled quite early on, but the climax is violent and disorienting.

Altogether it’s a clever, informative and entertaining story. Monsarrat has proved his worth to the administration and has now been moved on again in what is looking like a dangerous tour of the convict settlements of Australia. His next destination is Van Diemen’s Land (Tasmania), possibly the toughest prison camp.