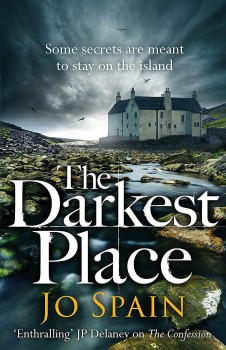 Out-of-favour DCI Tom Reynolds gets a Christmas day call to a mass grave on an island off the Kerry coast, once the home of a controversial psychiatric institution, where there is one body too many – probably that of one of the doctors, missing for more than 40 years.

Jo Spain continues to expose the failings, hypocrisy and corruption of her country’s recent past through the medium of National Bureau of Criminal Investigation and DCI Tom Reynolds.

She’s looked at the darkest and most traumatic parts of Ireland’s history, highlighting the scandals and denials of church and state over mother and baby homes, the Magdalene Laundries and Industrial Schools, and in this fourth novel of the series she turns her attention to the even greater scandal of mental health.

The horrifying story of the asylums for society’s unwanted – those who challenged the powerful, those with learning difficulties, epileptics, women who fell short of rigid religious expectations, and others – is shameful.

Ireland is not the only nation to fail in this field, but the arrogance of  doctors and staff using their positions to abuse both physically and sexually, torture and even kill the vulnerable, while society turned a blind eye and the establishment and judiciary offered no effective monitoring is one that still echoes.

Spain’s latest well-researched and sensitive modern morality play again features the scourge of indifference and corruption and the grim realities which so affect Irish society today. Again she poses an entirely believable scenario of sickeningly dark deeds below the apparently respectable surface.

Reynolds has been sidelined from investigations amid a series of media leaks that question his character and abilities, and his self-promoting boss has been conspicuous by his absence of support. On Christmas Day, he is despatched to an island off the Kerry coast, known to locals as the island of lost souls and home to the former St Christina’s asylum, where the murdered body of man in the clothes and with the identity papers of a former doctor, missing for over 40 years, has been identified in a mass grave. It is the cold case which Reynolds believes is meant to finally bury his career.

But nothing can prepare the DCI and his team for what they discover once they arrive on the island and the harrowing picture that emerges of horrifying surgeries, torture and abuse, with patients who were not insane but driven mad by what was done to them with no possibility of help or cure, and their only escape was an early death.

This is a true horror story, compellingly told with unexpected twists that ensure a thought-provoking and thrilling read and a superb addition to what is turning out to be a riveting series.

Spain’s policemen are real humans – decent members of the garda doing the best job they can. Although inevitably in any unit there are ongoing personal problems, largely they live normal lives, with real concerns and thankfully realistic dialogue. There are no alcohol problems, no drugs, no psychological dramas – although what they find on Oilean na Caillte might provoke nightmares.

The Darkest Place is deftly plotted, atmospheric and compelling, with sympathetic characters, the tension expertly handled, but with something horrifyingly dark lurking around the edges. It is a deeply compelling read.

The warmth, humanity and compassion of many of Spain’s characters and occasional touches of gentle humour stop it from becoming totally bleak, although if you have a sensitive nature some of her descriptions of conditions and treatments are guaranteed to make you feel sick.
Her clear, unfussy prose makes for a riveting but easy read, with the pace building slowly, much like the investigation, to a tense and surprising climax.