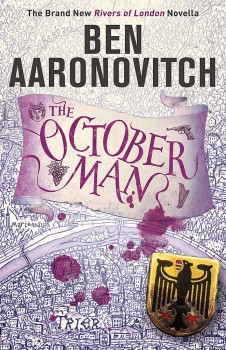 ‘Life is too short to drink bad wine,’ said Goethe. But a Trier drinking club may seriously shorten your life and it’s not down to liver damage. It’s down to Tobias Winter of the German magic police to find the connection that links a death in a vineyard with the supernatural history of the region.

It's the Folly, Jim, but not as we know it. Actually, it's not The Folly at all. We're not in London, we're in Germany. And Tobias Winter works for the Bundeskriminalamt-Abteilung KDA - the Federal Criminal Police Department of Complex and Diffuse Matters, thank you very much. It's the equivalent of the Folly but with more forms to fill out. The KDA seem to be more official than the Folly is, as they are part of the crime processes that all German police forces follow.

One such complex and diffuse crime scene means that Tobias Winter pays a visit to Trier, on the banks of the Moselle river near the border with Luxembourg. A body has been found in a local vineyard with an unnatural growth of fungus on it. The fungus is found to be the same as the 'noble rot' that is used in the production of the region's finest wines. Tobias and Vanessa Sommer (his local police minder) have to delve into the city's past to find the answer to this and other crimes before the killing continues.

This novella is set parallel to the main Rivers of London/Peter Grant series. Ben Aaronovitch's website places it before Lies Sleeping, the last novel. As a novella, the crime story itself is fairly straightforward with only a couple of twists in it to stop it the villain being obvious from the time the body was found. The main pleasure in this book is seeing magic police in another milieu and seeing the Folly – or reports of the Folly – from another angle.

Tobias Winter shares many qualities with Peter Grant. He is young, bright and starting his apprenticeship in magic. He is also armed, which changes some crime procedures, and less likely to get distracted by architectural details. But those differences are a little thin and I never really thought he had his own distinctive voice in the first-person narrative, as there was always an echo of Grant there. However, some parts of magical policework are always the same; sceptical colleague, the need for detailed research and keeping 'in' with the local river goddesses.

I enjoyed this little diversion into the KDA. If you're a fan of the Peter Grant novels, this is worth your while. You'll probably, like me, want to read more about Tobias and wish for a crime that needs the involvement of Peter and Nightingale in this ordered German department.