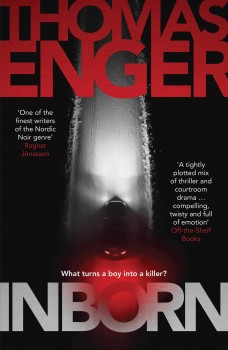 The high school in a small Norwegian village becomes a double-murder scene. Immediately everyone points at 17-year-old Even who has been recently dumped by Mari Lindgren, a girl found dead after the school concert.

Inborn / Killerinstinkt was initially written for young adults and published as such in Norway. Some time later its author Thomas Enger felt that there might be potential for the novel to appeal to grown-ups as well. Having penned one version already he needed some persuasion to recreate the story for the English readers and the result is here, translated by Kari Dickson, as Enger had structured the original slightly differently. I feel that both versions would appeal to a range of ages, and fans familiar with Enger’s sharp gripping narratives in the Henning Juul series.
Here the main premise is based on a simple yet frightening question: what turns a boy into a killer, and to what extent his behaviour depends on his own upbringing and his family’s history. The book follows the events surrounding the trial of a young man accused of murder. As the past and present are interwoven, details of several familial relationships and interactions between teenagers are the building blocks showing the complexity of the modern world where judgments are made and shared in a matter of seconds.
A high school in small village of Fredheim in Norway becomes a murder scene when bodies of two teenagers are found after a school concert. The victims are Johannes Eklund, a promising rock star, and Mari Lindgren, hoping to be a journalist, who was just about to write an article about him. The shock waves reverberate through the close-knit community, pupils and their parents, suddenly making everyone extra aware and gullible and convinced that they know identity of the killer.
Seventeen-year-old Even Tollefsen is the main suspect, having recently been dumped by Mari, with no explanation. He’s the local football star, trying to be a responsible big brother to Tobias and a good son. Angry and terrified, he acts in the typical way of someone cornered, an adolescent ruled by hormones and self-doubts, instantly thrown off the pedestal and hated by all who have opinions and suspicions.
Inborn is told through Even’s own words in the court and the memories of the months leading up to the crime. It becomes apparent that there were more people acting suspiciously, with personal agendas. It appears that Even’s father Jimmy’s death in a car accident ten years earlier got Mari very interested. Jimmy had fallen ill and passed out in the car while his wife Susanne hadn’t managed to take the steering wheel properly which resulted in his death. She seems to have never recovered from the crash, occasionally losing grip on the difficult task of raising two young sons. The most stable presence in their life has been that of his uncle Imo. Yet Evan does not know whom to trust during this tough time.
The other perspective comes from Yngve Mork, a grieving policeman nearing retirement, an astute man who can see Even’s grief and anguish, and aware of how the local secrets have impacted on a generation of kids. In a world full of conflict, tension and fear where no one can hide from the powerful and instantaneous trial by social media because that’s how it is these days, the story of Even’s family is both chilling and sad. Enger keeps the level of suspense growing until the intense finale.