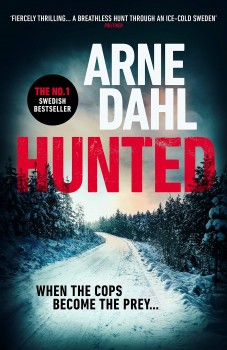 Private investigators Sam Berger and Molly Bloom are on the run from the authorities, burned from previous investigation, and hiding in the depths of snowy north Sweden. But soon they are asked to follow up on the letter from a distressed and seemingly paranoid woman who knows secret details of a murder case from long ago.

Without a doubt Arne Dahl is the Scandinavian master of brilliant complex plots, intriguing characters and multi-layered narration. Hunted, another gem exquisitely translated by Neil Smith, is the latest example of his literary craftsmanship which combines the most unexpected twists and morally dubious questions about trust, guilt and humanity. Add to this sensual near-tactile snowy environment and a huge dose of brutal reality of covert operations, and you can’t go wrong with the sequel to Watching You.
The previous book in Dahl’s new series set in motion a complicated professional and personal destiny for Detective Sam Berger. I would suggest that you read them in sequence; however, Hunted gives you a chance to become familiar with deeply flawed but intriguing person and will only whet your appetite for more.
From the very first pages deception takes root. Blurred identities and shifting perspectives create very uncomfortable circumstances for the main protagonists, and if you blink you might miss what’s happening. But persevere as the web of apparent coincidences becomes a very cleverly constructed plot where everything makes sense, even if it leaves you shocked.
Superintendent Desiré ‘Deer’ Rosenkvist of Stockholm Police receives a typewriter-written letter, dripping with complete desperation and paranoia, from a woman claiming she’s being spied on in her isolated house in the middle of nowhere. She states she’s in the Darkness. Jessica Johnsson was known as an unstable, damaged victim of a horrendous past.
Rather than dismissing it, Deer decides to deal unofficially with the letter as it refers to one of her previous cases of a murdered prostitute, including a detail only known to the murderer and the police. It was an ink mark of a four-leaf clover on the victim’s buttock. She sends private investigator Sam and his colleague Molly Bloom to find out more. In the remote north of Sweden, the pair mostly hide in two isolated cabins, cut off from all forms of communication apart from satellite phone. They track down Jessica but the interview turns into them being seriously assaulted in the cellar of her house.
The trio of Deer, Sam and Molly work pretty well together, trying and often failing to race against time and the increasing amount of missed or concealed evidence. But trust becomes a very delicate floating quality in the group. The relationship between them goes through different phases as Sam constantly feels that he cannot trust Molly and his memory gaps don’t help at all.
He is still reeling from the betrayal and murder of his colleague which had led to both being disgraced and on the run from authorities. Molly, a highly trained Secret Service dark horse, saved Sam after his serious breakdown yet she seems to hide something. Sharp, efficient Deer unwillingly starts to lead a double life too, especially as the hunt for the killer becomes personal. She and Sam must have been involved in something eight years ago, something that set a trail of horrendous killings, linked to the horrific murder of a mother and her young son, and a signature four-leaf clover found on other victims.
There are red herrings aplenty, and the whole investigation stinks worse than the traditional Swedish canned fermented fish. Sam and Molly keep digging regardless of being undercover, unofficial and watched.
Piecing together a profile of the killer, discovering tiny overlooked details and then biography facts leads them to different conclusions. The layers of suspicions, mistrust and surveillance damage their pursuit because even if they are aware of being watched, they don’t realise how deeply it goes. Cops become prey. This is thrilling stuff!