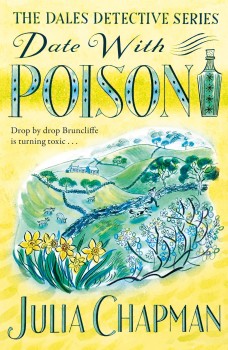 PI Samson O’Brien is in deep trouble, framed by a gang out to destroy him. When his godson goes missing, accused of dealing drugs, can he persuade his estranged partner Delilah Metcalfe to help him find the boy?

This clever, witty and realistic series is quite out of the ordinary and strongly recommended to anyone who wants a genuine, but not too cosy, cosy. There’s a strong cast and good plotting, enough humour to make you smile and enough mystery to keep you guessing, all set against a superbly depicted background of the Yorkshire Dales.

This fourth of Julia Chapman’s tales of the harsh life of the hill farmers and the townsfolk of Bruncliffe – two mills, one quarry, all derelict – is portrayed with affection for the area and its people and riddled with dry Yorkshire humour, warmth and humanity to offset its grim, but strangely beautiful, background and which captures the warm-hearted and generous side of a people often known for their ‘brussen’ – an aggressive stubbornness.

All the main protagonists return as you would expect in a small town – even the malodourous, uncouth and none-too-honest hill farmer Clive Knowles who is desperate to find a wife. They’re all very ‘real’ people, talking and behaving exactly as you would expect them to.

Samson O’Brien, the National Crime Agency undercover cop sent on indefinite leave for his own safety, has launched a local PI business to make ends meet. The woman from whom he rents office space is Delilah Metcalfe, fiery boss of a struggling dating business, getting over an impulsive – and bad – marriage, and constantly worried about cash flow, together with her beloved dog Tolpuddle.

Spring is in the air, but Samson, the former ‘black sheep’ of Bruncliffe, is in deep trouble, arrested and questioned about a murder of which he has no knowledge and also facing a Met police disciplinary inquiry into the theft and resale of drugs seized as evidence – part of a smear campaign and threats to his life launched by the gang he was investigating.

At the same time Delilah’s nephew and Samson’s godson Nathan is accused of dealing drugs at his school and when he runs away a frantic search of the inhospitable and dangerous moors begins. Meanwhile local vet ‘James’ Herriot Ellison, rushed off his feet by the lambing season, is beginning to suspect a worrying spate of canine poisonings are part of a deliberate plan to kill the town’s working and pet dogs.

With rumour and gossip making Samson a reviled figure in the community, a shell-shocked Delilah can’t believe that she has again proved to be such a poor judge of character. The detective knows he must ask Delilah for help, but will she forgive his transgressions so they can find Nathan and unmask the poisoner?

This clever tale works reasonably well as a standalone, although it would help to understand the established characters, such as fearsome cleaner Ida Capstick, from the earlier stories. Despite Samson’s troubles, she is one of a small core of locals who believe in and trust him.

This book, the best so far in the Dales Detective Series, concentrates more on the personal lives of the two main characters than on the investigation they eventually conduct. Chapman has carefully built up reader interest in two of the funniest and heart-warming detectives in fiction – and their evolving relationship with the rest of the town is almost as interesting as the cases in which they become involved.