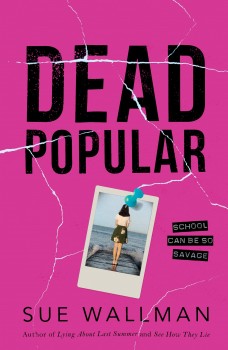 An illicit party at an elite boarding school ends in a death. Did the dead girl fall or was she pushed?

Kate Jordan-Ferreira knows what it takes to be queen bee at her elite boarding school. She’s been made House Prefect at Pankhurst House in Mount Norton School, where the sons and daughters of the rich and famous do their best to lord it over each other. Kate hopes she got the position on merit but, a hefty donation from her father probably paid a large part, as that’s the way things are done at Mount Norton. Kate’s best friends are Meribel and Lo, who bask in her reflected glory, and have her back when it comes to the perpetual in-fighting with their bitter rivals, Clemmie and Paige.

There’s a new teacher at school and it’s plain from the outset that Miss Calding isn’t going to the same sort of pushover as her predecessor, and Kate and her friends know they’re going to have to be on the ball when it comes to holding the sort of illicit parties that they’re so keen on. The previous house prefect had set a high bar for these, but Kate is determined to throw the best party in history, and with the help of her godfather, who books a stunning newly built house on the nearby cliffs, she lays on a lavish party, determined to secure her place in Mount Norton history. This she does, but not in the way she intended, and one of her rivals ends up dead in a fall from the cliff, leaving the age-old question to be answered – did she fall or was she pushed.

Dead Popular is a darker take on school stories but anyone familiar with Malory Towers and St Clare’s will recognise elements of the Enid Blyton classics, with lashings of alcohol in place of ginger beer and a more deadly edge to the teenage rivalries. There are boys as well, with all that entails. There’s posh Hugo, who’s very easy to dislike as he delivers casual snubs and well-calculated put-down, and moody Munro, with a reputation for being unpredictable that’s hard to shake off. But Munro still comes over as easier to like than many of the others.

I’ve always been a lover of school stories and Sue Wallman serves up an excellent successor to some of my early favourites, in a modern setting, with plenty of real, three-dimensional teenagers, and a cleverly layered plot that was enough to keep me guessing for quite a while. Mount Norton, is splendidly realistic, harking back to the adventures of Darrell Rivers and her friends in Malory Towers’ bleak coastal setting, and quickly establishes itself as almost another character in the book.

There’s a strong focus on keeping up appearances, which fits with young lives lived online, where everyone is judged by the number of likes on Facebook and followers on Instagram. Beauty is often only skin-deep and the pressure to be perfect can be crushing.

Wallman’s writing is sharp, her teenagers are well-drawn, and the plot is enough to make the parents of any teens at boarding school blanch. Dead Popular is an excellent YA mystery that kept me very happily entertained as I attempted to uncover whodunit. There are no jolly hockey sticks in this story, but if there had been any, I would have expected them to be used for lethal purposes!