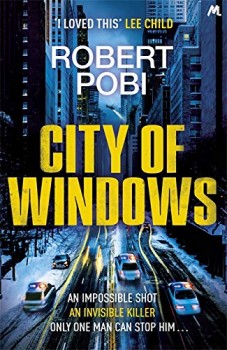 A sniper is terrorising New York, preying on law enforcement officers. The FBI call in Dr Lucas Page, a man who sees the world in a different way. Unlike anyone else, he has a chance of working out where the killing shots came from.

New York is in the grip of a blizzard. It’s also in the grip of terror as a sniper is operating in the city, targeting law enforcement officers. A police officer has his head blown off in a moving car, and a woman is killed when the out of control car pins her to a lamppost. Another is killed whilst a passenger on a moving train. Both shots are almost impossible, but against all the odds, they succeeded.

The FBI Special Agent in Charge, Brett Kehoe, knows that only one man has the sort of mind that can help them work out where the shots were taken from – former FBI agent-turned-university professor Dr Lucas Page. But Page wants nothing to do with his former employers. Working for the FBI cost him an arm, a leg and an eye. Page thinks they’ve already had more than any man should have to give. He wants to be left alone with his wife and adopted children. But Kehoe has the hook to reel him in. The first victim was his former work partner, and that’s not something Page can easily walk away from.

Lucas Page sees the world through different eyes to most people. For him, it’s all about numbers, angles, distances. He has a mind like a computer, able to analyse seemingly impossible scenes and come up with the right answer. He’s also awkward to the point of rudeness, especially where Whitaker, the female agent charged with driving him around, is concerned.

City of Windows quickly establishes its characters as the story hits the ground running and doesn’t ever slacken its grip. Page, despite his rudeness, is an easy character to like, as is Whitaker, who has no problem calling him on his bullshit. Despite Page’s almost uncanny ability to work out the sniper’s chosen firing positions, they are still no nearer to catching the person responsible for the killings.

The plot is complex but never impenetrable. There are clues, but they’re buried deep, and it takes time for the links between the victims to emerge. City of Windows is a clever, well-paced thriller, with a main character who is far, far more than the sum of his past problems and despite his multiple disabilities, Page contrives not to lug his backstory around in an over-loaded suitcase. I liked him, as well as the dry, unflappable Whitaker and the laconic Kehoe. There are some very tense scenes, especially when the sniper starts to make things personal and, as ever, I spent a disproportionate time worried about the family dog, but Pobi doesn’t go for the cheap emotional punches beloved of so many crime and thriller writers.

If this is the start of a series, then I’m very happily on board, although I doubt Page’s wife will feel the same way.