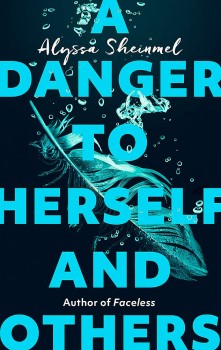 A Danger to Herself and Others

Hannah Gold doesn’t understand why she’s been consigned to a secure mental facility. After all, it wasn’t her fault that her roommate fell from a window and ended up in hospital in a coma.

In many ways, Hannah Gold has an old head on young shoulders. In all her 17 years she’s shared her parents’ life and has been a parental mini-me since she was a jet-setting toddler. But now her parents have committed her to a secure mental facility and although Hannah knows it’s all a huge mistake, she can’t seem to convince anyone else that it wasn’t her fault that her roommate at college fell out of a window and is now in a coma …

A Danger to Herself and Others is a seriously creepy young adult psychological thriller seen through the eyes of 17-year-old Hannah. With the title as a constant reminder of how others see her, it doesn’t take much to work out that Hannah’s an unreliable narrator, but amidst a series of cleverly shifting perspectives and gradual revelations, it’s hard to know what to believe, and I found myself reading faster in the hope of learning more about the young protagonist’s past and present.

At first, Hannah is kept in isolation in a single room that’s little more than a prison cell. She has to wash and go to the toilet all within those four walls in a space defined by the number of paces it takes her to move around the room. Things take a turn for the better when a new roommate, Lucy, arrives, as she gives Hannah someone to talk to and relate to, and it seems that the two girls can help each other, and Hannah starts to gain some privileges, like leaving her room for showers and meals, but it doesn’t take long for things to get worse again.

Alyssa Sheinmel paints a convincing portrait of Hannah’s mental difficulties and she alternates from sympathetic to frightening in the blink of an eye as more of her story – and her thought processes – come to the forefront. The prose varies from disjointed – perfectly representing Hannah’s thought – to fluid and almost lyrical in places, and I gave up trying to second-guess what the reality actually was and simply went with the flow.

The narration, from Hannah’s viewpoint allows an intimate look into a disturbed mind, where fact and fiction blend into a seamless whole. By the end, I felt like I’d gone through the emotional wringer along with the book’s young protagonist, and was at Hannah’s side throughout a deeply unsettling journey. This is quality writing for teens and adults alike.