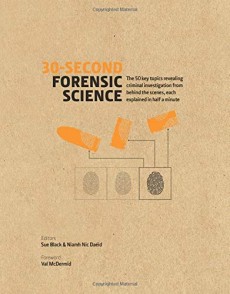 A quick-fire look at the fascinating and varied world of forensic science by two of the leading experts in the field.

There are few crime writers who haven’t heard the name of Sue Black. She appears in numerous acknowledgments sections with crime writers thanking her for help on the technical side of her craft. She’s currently the President of the Royal Anthropological Institute of Great Britain and Ireland and before that was Professor of Anatomy and Forensic Anthropology at the University of Dundee.  Her former colleague, Irish forensic scientist Niamh Nic Daéid, the Professor of Forensic Science and Director of Research at the same university, is perhaps less well known but is certainly no less well qualified.

Apart from possibly the most bunny-wunny of cosies, it’s hard to see how crime writers can get by without a firm grounding in forensic science, as it plays a large part in the settings of most crime books. Readers of Jeffery Deaver’s Lincoln Rhyme series will be familiar with Locard’s exchange principle, often simplified to ‘every contact leaves a trace’, but few will know anything at all about the French scientist himself and his other work. This is something that 30-Second Forensic Science will quickly change.

The book, with a forward by the Queen of Crime herself, Val McDermid, is divided into seven sections, each containing a short profile of an expert in the relevant field from the persuasive advocate Sir Bernard Spilsbury, suspected of swaying juries more by the force of his personality than by the strength of the evidence, to genius Alan Turing, whose expertise in computer science and code-breaking played a major part in the second world war, but who was utterly shamefully treated because of his sexual orientation.

The sections, entitled The Body, Biometrics, Traces. Physical & Chemical Analysis, Natural Science Evidence, Digital Records and the Law & Science, each contain a glossary followed by a page on a topic within that field. Each page is beautifully complimented by an illustration by artist Nicky Ackland-Snow, every one a work of art in themselves, giving a faintly Victorian, sepia-toned feel to the text, in contrast to the sharp descriptions of various scientific terms.

In keeping with the title, each page of explanation by an expert in the relevant field contains a 3-Second Clue, a nugget of information on the term under examination, followed by a slightly longer 3-Second Evidence, which looks at the subject in more detail under the heading ‘the 30-Second Scenario’. Both of these complement a longer section on each subject. By way of minor criticism, I think it would have made greater logical sense for these terms to be reversed, with the longer section being headed 3-Minute Evidence and vice versa. Also on the slightly negative side, adopting a dark background with white text for the biography sections doesn’t make for easy reading. But those are minor quibbles in an otherwise excellent book that takes a detailed look at the forensic science without which most crime writers can’t easily function.

This is a book for crime writers and readers, and will shed light on so many of the genre’s everyday terms. The format makes it a quick read, and it’s a book I’ll turn back to again and again, sometimes for information and explanation, and others to savour the illustrations.