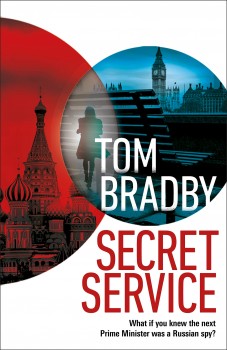 When the Prime Minister announces that he’s stepping down from the leadership due to cancer, MI6 believe that one of the candidates for the top job might be in the pay of the Russians.

Kate Henderson is a senior intelligence officer heading the Russian Desk at MI6. When one of her operations yields the startling news that the British Prime Minister is about to resign as a result of cancer, she’s left trying to decide how reliable the source of the information is. She also has to grapple with the knowledge that the Russians have a mole at the very heart of government and that mole stands a very good chance of getting elected.

The trouble is that Kate and her colleagues don’t know which of the candidates for the top job is in the pay of the Russians. And one of those in the running is a personal friend of Kate and her husband.

Tom Bradby, one of the presenters of ITV’s News at Ten, takes an insider’s look at the political turmoil in the UK where the prospect of Russian interference in an election isn’t particularly hard to swallow when set against the backdrop of rumoured interference in both the Brexit campaign and the US elections.

He builds a convincing picture of the pressures facing Kate as a woman and an intelligence officer, juggling her family life and a job that requires frequent unexplained absences, often at very short notice. I liked her teenage children, and one of the best scenes for me was the tense retelling of her son and daughter, along with the daughter’s girlfriend, being menaced inside the house without their parents there.

Her colleagues, Julie, some 20 years Kate’s junior, and Rav, a friend she’s worked with for years, are convincingly portrayed. Kate comes over as very ordinary, which is both one of the book’s strengths as well as a potential weakness, as there are times when ordinary tips over into boring, and as spy thrillers go, Secret Service isn’t particularly thrilling.

There’s plenty going on, and it’s clear that the stakes are high, but much of what happens seems routine and the story never quite hits its stride. The denouement, although surprising, wasn’t quite a big enough pay-off for me, and I’d hoped for more. The political characters seemed rather flat, but perhaps that’s more of a reflection on the current state of politics and politicians in the UK than it is on the quality of Bradby’s writing. And I much prefer his flamboyant fictional Foreign Secretary to one of the real ones we’ve had recently!