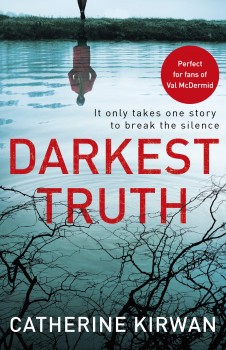 Young lawyer Finola Fitzpatrick receives an emotional appeal from a father to investigate his daughter’s suicide – and the man who he believes caused it.

Finola Fitzpatrick, Finn to her friends, handles the less orthodox cases for her Cork legal firm. Sean Carney believes his daughter Deirdre was seduced, raped and abandoned by filmmaker Jeremy Gill, leading to years struggling with depression and ending with her drowning herself in the River Lee. Finn is at first reluctant to take the case on; she knows proof will be difficult to obtain even if Sean is correct in his assumptions.

But she makes a visit to the Carney home, and discovers some small items hidden by Deirdre which give her a place to start. Some urgency arises from the fact that Gill, a local man who has risen to fame in Hollywood, is due in town in the next few days and may still be a danger to young women. She is also told by Sean’s wife Ann that Deirdre, like Finn, was adopted and that the two shared a birth mother.

Finn is a director of the local film festival at which Gill will be appearing and is able to check past records which help her to begin assembling a timeline for events at the crucial period. However, when in a talk to local schoolchildren Gill appears to be ‘grooming’ a girl, Finn challenges his request for contact details and her distrust becomes public, leading to hostility from Gill and public opprobrium.

Events now take a more serious turn. Finn finds evidence that Gill has a pattern of behaviour with young girls, and she visits Dublin to speak with one victim. The girl is murdered the next day; Gill has an alibi, but Finn believes it is false. Gill’s reputation makes him a hero in Cork and Finn is getting flak from her film festival colleagues, her firm and from the public. Even the police seem reluctant to help, and Gill is a master at manipulating the media to his own advantage.

As a showbiz personality who uses the power of his position to bully women, and in his preference for children (15-year olds his favourite) Gill is very much the villain du jour, but none the less convincing for that. The action is set some five years before present which makes the reluctance of the public to hear anything negative about a Hollywood mogul believable: after Harvey Weinstein one cannot imagine things would be quite the same now.

As for Finn, I enjoyed the energy with which she tackles the challenge of uncovering evidence and was able to forgive her enthusiasm for country music. She is another of those fiercely independent women protagonists with great sympathy for others but who find it difficult to make close relationships. The glimpses of Cork and snatches of Irish vernacular also give the book a taste of society.