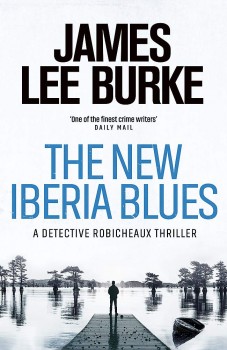 When the crucified body of a young woman is found floating on a cross near the estate of a local boy made good as a freelance Hollywood director, Cajun detective Dave Robicheaux and his new partner Bailey Ribbons, investigate.

Why does this 22nd story in the all-embracingly brilliant saga of Cajun detective Dave Robicheaux read like a swansong? Has the rugged-looking Texas-born James Lee Burke, surely the inspiration for the Marlboro cigarette cowboy, had enough now he is into his 80s? Like Robicheaux, who has fought too many battles – Vietnam, with killers and hustlers, police brass and the bottle – has he realised that the American Dream he so poetically and grittily portrays is being buried under a culture of greed and expediency?

As the Louisiana rural landscape, which plays such a haunting and lyrical part in the stories is changed by Gulf tides, lack of preservation and thoughtless, profit-grabbing development and its French/Cajun Deep South culture is overwhelmed by the modern world, is there a place left for stories which incorporate American history, social justice, moral ambiguity, personal loyalty and a raging white, middle-class guilt-trip?

Robicheaux and his former partner and friend Clete Purcell are flawed, but well-intentioned throwbacks to what some Americans see as the golden days of the 1950s. If this is Robicheaux’s ‘do not go gently into that good night’ moment, Burke never allows the weight of his heroes’ histories to even threaten to overwhelm the storyline.

Robicheaux and his ‘guardian angel’, the drunken, violent, simplistic John Wayne character that is the former Marine Purcell, are beginning to feel weighed down by advancing age.  They battle on, clinging to the knowledge that although ‘we would never change the world ... the world would never change us’, despite threats from dark forces within and outside on the lives of Robicheaux, his loved ones, and the people of New Iberia.

Burke is the undisputed master of Southern noir and the story opens with the first of a series of ritualistic murders – a woman crucified and floating on a cross near the estate of a local boy made good, freelance Hollywood director Desmond Cormier. As Robicheaux and his new partner, the beautiful Bailey Ribbons, investigate, he becomes convinced that either the enigmatic Cormier or one of his entourage is deeply involved in the killings.

Robicheaux’s clumsy over-protectiveness causes strained relations with daughter, Alafair – perhaps not incidentally the name of Burke’s own daughter – now a novelist and screenwriter who is working on a film with Cormier. And when he finds himself attracted to the much-younger Bailey, his mind is filled with ‘thoughts and desires that boded well for no one’.
Haunting flashbacks to Vietnam; sheriff Helen Soileau doing her best to limit the fall-out from Robicheaux’s self-destructive impulses; organised crime and its grip on Hollywood; and the misty bayou itself, where the silent spirits of the Confederate dead mingle with Robicheaux’s own lost, all provide a suitable background to this tangled plotline.

The ritual/tarot theme of the murders is intriguing, although perhaps under-developed with its connection overwhelmed by the complicated plot threads. But in a ghostly flash-back which lends credence to the swansong theory, there is a return for one of Burke’s greatest creations, Smiley Wimple, the crazy, but curiously moral, contract killer whose childlike attitudes allied to a ruthless professionalism, instantly raises the pace and tone every time he appears.

The ending is perhaps the weakest part and the final chapter is not either Burke’s – or therefore Robicheaux’s – finest hour. That comes much earlier, when the detective is finally forced to confront the realisation that he is becoming old, and that his time as the hand of justice and decency has passed.

If this is to be the end of Robicheaux, it is a more than adequate conclusion, a nostalgic goodbye to much-loved characters who fans actually travelling to New Iberia and the bayous to see the settings of these wonderful stories for themselves.

As for Burke’s uniquely indulgent writing, as close to prose-poetry as you’re likely to find in the crime genre, which has brought him two Edgars and a CWA Gold Dagger, his innate understanding of the nature of good and evil and the mesmerising ability to paint a vivid picture of a scene or character marks a true master of his craft.