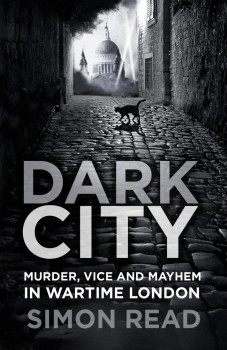 Muggers, rapists, gangsters, looters and killers roamed the wartime streets full of vice girls and servicemen with money to burn. Some of the most violent and spectacular crimes and criminals of the period are revisited.

Crime writer and reporter Simon Read paints a vivid picture of the other side of wartime London where, as the bombs fell, crime exploded. From the Blackout Ripper and Acid Bath Murderer John Haigh to John Reginald Halliday Christie, the notorious Rillington Place killer and his house of corpses, he presents some of the blackest crimes of one of the blackest periods in the capital’s history.

Wartime London was a criminal’s paradise. Muggers, rapists, gangsters, looters and killers roamed blacked-out streets full of vice girls, gambling clubs and servicemen with money to burn. Read revisits some of the most violent and spectacular crimes and criminals of the period.

The constant bombing made the job of the police a nightmare. The sheer number of bodies or body parts retrieved during the Blitz made it impossible for the authorities to autopsy them all. Many more just disappeared, blasted into unrecognisable pieces.

This provided perfect cover to those who worked with blades, guns and more sinister tools and stretched Scotland Yard resources to the limit in its attempt to tackle a crime explosion born of the circumstances which became a background for crimes still infamous today.

Read’s style is dry and factual – almost that of a prosecutor outlining a case he knows is open and shut. Using police files from the British National Archive in Kew, he deals with some of the worst killings of the period, covering the detection and trail of Gordon Cummins ‘The Blackout Ripper’, John Christie and Timothy Evans, whose conviction and execution is still debated today, and John ‘Acid Bath’ Haigh.

He relays the facts as presented to their trial juries and despite adding as much detail of their childhood, upbringing and adult life as is known, offers no conclusions, leaving the reader to make up their own mind as to whether these monsters were psychologically disturbed or just evil.

Added to this catalogue of horror are other examples of the worst of wartime London such as the 1944 jewellery robbery by members of the south London Elephant Boys gang and the subsequent killing of a naval officer by their getaway car; the gangland stabbing by Italian mobster Antonio ‘Babe’ Mancini of Harry Distleman, a member of the Hoxton Boys, in a long-running war over gaming and drinking clubs, protection rackets and black market deals; and the strange case of GI Karl Hulten and Welsh wannabe Elizabeth Jones, which provided the background for the 1989 film starring Kiefer Sutherland and Emily Lloyd, Chicago Joe and the Showgirl.

If there are heroes in this grim catalogue it is the patient detectives who pursued cases for months and some for years and the pathologists, the established Sir Bernard Spilsbury and the rising star of the profession Dr Keith Simpson, who would continue to work for many years and come to be recognised as one of the greatest forensic investigators ever.

There’s nothing nice about this book. It’s a brilliant piece of factual reporting on a time and its crimes that we should never forget.