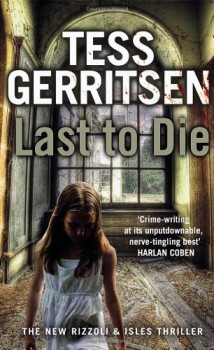 The families of children, already no strangers to violence, are being targeted and killed. Can a remote boarding school in the Maine wilderness provide a safe haven or will it prove to be just another hunting ground?

“To lose one parent, Mr Worthing, may be regarded as a misfortune; to lose both looks like carelessness.” With Lady Bracknell’s cut-glass tones echoing in my head, I was pretty certain that she would have raised her aristocratic eyebrows at a plot that involves families who have adopted or taken in the children orphaned by violent crime being themselves subjected to brutal murders, with the children seemingly the target of the attacks. But Tess Gerritsen takes the idea and runs with it in a way that requires very little suspension of disbelief.

Last To Die, gets off to a flying and shocking start when teenage orphan Claire Ward does a runner from home, to the distress of her foster parents who want nothing more than to keep her safe. The problem is that someone else wants quite the opposite. Their car is attacked, her foster parents are shot, and Claire barely escapes with her life. Then 14-year-old Will Yablonski escapes death by being outside, star-gazing, when his aunt and uncle’s farmhouse is burned to the ground, trapping what’s left of his family inside.

They aren’t the only children to have lost close family members to violent crime, sometimes more than once, but Evensong, a boarding school in the remote Maine wilderness specialises in taking such children and giving them the skills they need to survive, as well as providing a safe environment in which they can not only recover from their various traumas but also flourish. It soon becomes clear, though, that no haven can be regarded as safe now.

It falls to forensic pathologist Maura Isles and Detective Jane Rizzoli to piece together the similarities between the various cases as well as doing what they can to heal the rift in their friendship, caused by Isles’ testimony against a police officer.

I came late to the series and was reliant on whatever crumbs of backstory Gerritsen saw fit to dispense, and I think she very skillfully treads that particular tightrope, giving enough information to enable me to understand the place of characters like Julian ‘Rat’ Perkins, but without providing too much in the way of spoilers for earlier books. The only time this lack of prior knowledge provided something of a hindrance was when it came to the mysterious Mephisto Society, but frankly, the preponderance of conspiracy thrillers now makes it quite difficult to take any organisation like that seriously. That notwithstanding, the characterisation of the various teenagers who have been given a refuge at Evensong was uniformly excellent, and the part they play in their own salvation is one of the book’s strongest themes.

Last To Die moves along at a very respectable pace and did an admirable good job of keeping me guessing right to the end. Rizzoli and Isles fans will be well-served by Gerritsen’s latest offering and late-comers are unlikely to feel short-changed.