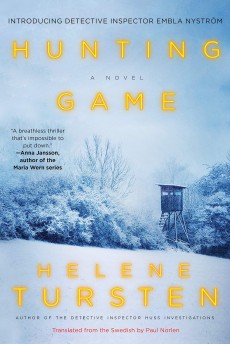 Detective Inspector Embla Nyström arrives for the annual autumn moose hunt in a deep Swedish forest. The local hunters are not happy about Peter, an outsider, joining them. Two people disappear, and then one is found dead in a lake.

From the opening paragraphs the impending doom hovers in the air as two powerful businessmen receive cryptic messages from someone who should not be able to send any. ‘I remember. M’ sends shivers through Jan-Eric Cahneborg and Anders von Beehn. Soon both men are preoccupied with getting ready for the annual moose hunt in the dense forests of rural Dalsland, near the Norwegian border. However, the threat remains at the back of their minds.
Detective Inspector Embla Nyström is also at the hunt, with her uncle Nisse and local landowners. The 28-year-old has learnt to channel most of her anxious energy into her stressful job with the mobile police unit in Gothenburg, and into boxing. Hunting allows her to step back into nature and relax mentally, forgetting about recurring nightmares. She is also a very experienced and respectful hunter. When she’s surrounded by the trees, she follows strict hunting traditions and enjoys the camaraderie with people that she has known for years.
However, this time a 13th person has joined the group, and the number seems to be a bad omen for the coming week. The new arrival is the attractive and enigmatic security consultant Peter Hansson, who has returned to the area to take over and restore the family home. Old Sixten Svensson is particularly unhappy and distrustful, shocked when faced with Peter’s attitudes. For him and the other hunters, mindful of quotas and general health and safety, killing animals for food is acceptable yet it should never be about fun and excitement, hence the very strict rules applying to everyone.
Embla is intrigued and quite charmed by Peter, and also wants to follow the rumours about a hidden room in his property. She is also keen to find out more about his family which has suffered a fair amount of tragedy in the past, including the disappearance of his teenage sister.
A couple of unpleasant incidents happen which only emphasise that superstitions never die. The tension within the group keeps building up but the hunt is on until two members vanish. Then a body is found floating in a lake.
Embla initially takes charge of the investigation, soon backed up by her small team. She digs into the past of her fellow hunters and realises that Ola Forsnaess, who had died in a car accident a year before, might have been murdered. As reckless teenagers, Cahneborg, Beehn and Forsnaess were known in the area as ‘the three musketeers’ and their fame followed them for a long time. Embla starts to see that there must have been some connection between an earlier death and current unsettling events.
In Hunting Game, translated by Paul Norlen, Helene Tursten introduces an interesting and conflicted heroine who knows herself well enough to have an awareness of how she reacts in certain situations, and especially being around guns and rifles. This aspect is well developed.
Tursten sets the scene perfectly, clearly dividing the book into two parts: pursuing animals and then searching for the killer. The slow pace changes to something more intense and the specific game rules apply to both. The unassuming prose with some unexpected twists keeps the reader on their toes, and as the hunters become prey and the psycho murderer goes on a full-on rampage, the finale culminates in some shocking scenes and moral dilemmas.
I particularly enjoyed the atmosphere created by both small and big details such as descriptions of wooden cabins, food, clothes and rituals associated with this autumnal event. Weather conditions in the Swedish wilderness play an important role in the story, becoming characters in their own right, and I hope that not too many moose were harmed in the process!