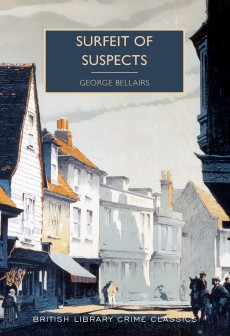 When an explosion at a Surrey joinery kills three of the directors, Superintendent Tom Littlejohn of Scotland Yard is called in to investigate.

Evington in Surrey in the mid-1960s was a small town undergoing rapid expansion. Growth has, however, done little for the Excelsior Joinery Company, which has failed to benefit from this new business. Such future as it might have had looks to be permanently blighted when a huge explosion at the company office kills three of the five directors assembled there.

It is soon established that the explosion was no accident, and for such a serious case Scotland Yard send a senior man: Superintendent Tom Littlejohn, assisted by Inspector Cromwell. One of the Excelsior directors, Dodd, was disliked for personal reasons by several people in town, and the precarious financial situation of the company also gives rise to motive, so there are plenty of suspects.

A number of clues emerge which give Littlejohn lines of enquiry, and despite initial reluctance, several interested persons are persuaded to disgorge relevant facts which lead the detective to a solution. He gathers the suspects together and provokes an admission which leads to a complete understanding of the crime.

Written in 1964 at about the time it is set, the story nonetheless has the feel of small-town pre-war Britain. Despite the brutal killings at the start, this is a fairly gentle tale where the police remain polite under the most severe verbal provocation, and where wrong-doers confess under the most subtle hint about prosecution. Anything in the nature of a physical dispute is referred to only second-hand.

All this adds to its charm, of course, as we follow Littlejohn in his visits to various witnesses, many of them quite odd and drawn effectively in brief sketches. The author depicts an alderman, a bank manager, a lawyer, and other persons believing themselves to be of note in the town with light sense of humour which undermines their sense of importance.

An introduction by Martin Edwards explains that George Bellairs was a pseudonym for Harold Brundell, a bank manager who wrote 58 novels from 1941 onwards but derived little income from his writing. Although his work ceased to be published in the USA after 1952 where tastes were changing with the appearance of the likes of Micky Spillane, he continued to sell elsewhere, particularly in France. The placid pipe-smoking Littlejohn might seem a little familiar; he has something of the Maigret about him.