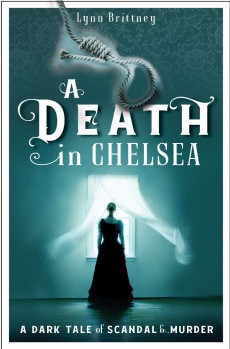 A Death in Chelsea

A society gossip writer is found hanged. She was hated by many and her family are convinced she was murdered. A small crime fighting team are tasked to find the truth.

Lynn Brittney’s second of her imaginative period Mayfair 100 series, set in London during the First World War, develops the story of the small team of professional policemen and educated women who are solving crimes.

A society gossip writer is found hanged. She was probably the most hated woman in London and her aristocratic family are convinced she was murdered. Using their society contacts, they ask that the investigation is kept under the radar.

The job goes to a small, specially-formed crime fighting team, the secret project of Commissioner Sir Edward Henry, who is keen to bring women into the service – a move strongly resisted by the Home Office. The war provides an impetus with most men on active service and women taking over all sorts of jobs hitherto denied them.

Mayfair 100 is the telephone number of the unofficial unit, run by a former Guards officer, the son of a baronet, injured and invalided out in the early months of the war. It is staffed by a former Special Branch veteran recalled to service, a tough, good looking, but partly crippled former Guards boxing champion and two remarkable, but distinctly upper-class women, one legally qualified, but denied the opportunity to practise by the Law Society’s strict male only rules, and the other a brilliant doctor at one of London’s leading female hospitals.

During the course of this story, they acquire a female pharmacist, forecasting the establishment of the forensics branch, and the occasional services of the lawyer’s titled widowed mother and the PC’s mother and aunt, both tough East Enders, capable of coping with almost anything.

The aristocratic Catholic Treborne family has fallen on hard times. But when their daughter, Adeline, a vicious and scurrilous gossip columnist, is found hanged in her bedroom, her mother, the Duchess of Penhere, begs the Commissioner, a friend of her dead husband’s, for a below the radar inquiry.

Following the success of their initial investigation, the team cannot wait to start. The victim was persona non grata in the high society she wrote about, so Beech and his team must establish how she got her information. A post-mortem by Dr Caroline Allardyce, a doctor at the cutting edge of the emerging science of forensic medicine, and the photographic input of new recruit, pharmacist Mabel Summersby, plus PC Rigsby’s unshockable Aunt Sissy, throws up more questions than it answers.

With a long string of suspects stretching from a QC to an MP to a baby ‘farmer’, the team unearth intrigue, prejudice, blackmail and an oddly suspicious sewing group entirely make up of servants of the aristocratic, rich and famous.

A Death in Chelsea is partly set in an atmosphere hardly out of place in Downton Abbey and partly in London’s nastiest sewers. Brittney cleverly portrays the turbulent and changing times – the economic decline of the aristocracy and their influence in the social sphere, the erosion of class difference, but most of all the changing role of women.

These, combined with a critical period of World War 1; the impact of early Zeppelin raids; the physical and mental issues of returning soldiers; anti-war protests; the suffragette movement; and developments in policing and forensic science, make for a diverse, compelling and gripping narrative with a great set of characters.

Former journalist, playwright and drama teacher Brittney is never afraid of the more unpleasant aspects of life in the period she features, but balances it admirably with both the technical improvements and the ambitions and grudging acceptance of women.

And the interplay between her protagonists – particularly the veteran Detective Sergeant Arthur Tollman and his much younger, but occasionally surprisingly bright East End PC Billy Rigsby – provides plenty of humour as well as accurately reflecting the rapidly changing face of police work.

This clever story, with plenty of well-researched historical background and social comment, makes this series one well worth following.