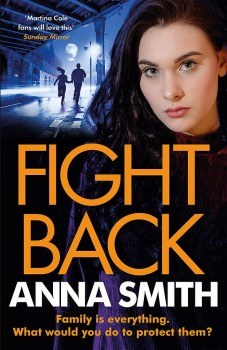 In this violent, blood-spattered sequel to Blood Feud, former corporate lawyer Kerry Casey is now a fully established ‘capa’, slowly moving towards her father’s dream of turning his gangland empire towards legitimacy.

As she pins the gang’s hopes for the future on building a Spanish property empire and ending its dependence on her dead brother’s drug-dealing and people-trafficking, rivals in Glasgow, on the Costa del Sol, and even further afield, sense weakness and set out to destroy the Caseys.

They will not believe that a woman has what it takes to defend her turf and won’t rest until they have it all. Led by a brutal Columbian cartel overlord, they strike at the heart of the Casey family and Kerry faces the fight of her life, with not only her business and her friends at stake, but also her own survival.

She is also driven by another incentive, having discovered she is pregnant as a result of her on-off relationship with an undercover detective from the National Crime Agency.

It would be selling this saga of Medellin versus Maryhill short to call it gritty and hard-edged and point out it is hardly for the easily offended or faint-hearted. Smith manages to double Scotland’s and Spain’s murder rate every hundred or so pages, interspersed with beatings, brutal torture, barbarities and, of course, sex straight out of Mario Puzo’s great story of the Corleone family.

The plot relies heavily on a parade of treachery and information from gangland connections and some unbelievable police sources. After a clever and well-handled start when the Casey family lawyer’s grandson is kidnapped to force Kerry’s hand, the simplistic storyline becomes rather repetitive.

Smith rarely disappoints. She’s as good as any modern writer of crime/action fiction  – and better than 99 per cent – because in a star-studded career in which she covered conflicts from Somalia to Kosovo, ethnic cleansing, unmasked drug dealers and paedophiles, and was one of the first journalists at the scene of the dreadful Dunblane Massacre and the 9/11 terror attacks, she has seen most of the most disgusting things humans can do.

She burst on the crime fiction scene with a brilliant series featuring the hugely popular Rosie Gilmour, a gritty Glasgow journalist who will stop at nothing to get her story. But if Rosie pushed the boundaries of belief, Kerry’s adventures go rather beyond.

This book has no real atmosphere, lurching from one bloody scene to the next. Many of the characters are one-dimensional and uninteresting, the dialogue often cliched and it is frequently difficult to appreciate the motivation for some of their actions. It’s pacey enough, occasionally frantic, and reasonably well structured until the final few chapters.

The ending is disappointing, although it clearly sets up another book, and the reader is left to guess at the outcome of the final action. If you like your action non-stop and incredibly violent, you’ll love his, but for me, it’s not up to Smith’s previously high standards.