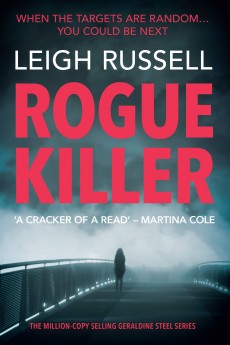 Only Detective Sergeant Geraldine Steel thinks a murder is the work of a more deliberate killer. When two more victims die in similarly indiscriminate attacks, the spectre of a serial killer stalks York.

Rogue killer? Rogue Cop might be a better description of this 12th of Leigh Russell’s Geraldine Steel series that has now been optioned by a TV production company. These imaginative stories should translate well to the small screen, but in book form are beginning to be too formatted – especially since her demotion and move from the Met to York. Alpha female she may be, but the lone wolf detective line so beloved of American authors is beginning to pall.

For a smart woman she can be pretty conflicted and stupid, constantly hiding her problems behind wine and ready meals. She seems unable to progress the relationship with the woman she grew up with as a sister. Her guilt for not seeing her often enough, too busy when she is with them and wanting to go back to work earlier show an unexpected immaturity and the involvement with her real sister has not moved on at all with Geraldine feeling guilty all the time. Neither does she appear capable of either coping with or clarifying her relationship with her former Sergeant, now DI, Ian Peterson.

These problems repeat from one book to the next, in almost identical situations and dialogue – as does her repeated pious view of her work, which is starting to grate. All this baggage is clearly beginning to affect Geraldine’s work. Many readers will make the obvious and well-signposted connection way before she gets even part-way near it. Then, as usual, she walks headlong into a situation she cannot hope to control, but somehow manages to emerge as one who puts the pieces together despite opposition from her senior officers.

When a man is killed in what looks a random attack, suspicion falls on a gang of muggers. Only Geraldine thinks this is the work of a more deliberate murderer. When two more victims die in similarly indiscriminate attacks, the spectre of a serial killer stalks York. The killer is brazen and vicious, stalking and attacking their victims without fear, confident the police will never catch them, despite leaving clear DNA evidence.

The police are convinced the first death is simply a mugging gone wrong and continue to devote their efforts to finding the gang – which gives Russell a nice and beautifully developed sub-plot as she explores the dynamic between the three muggers. The two older boys positively emanate a sense of ‘entitlement’ as well as the need to belong as opposed to their younger partner’s fear of being caught.

Whatever her failings Russell has again created a story full of tension and mystery from the very beginning. Readers are made privy to the killer’s inner thoughts in the immediate aftermath of the first murder. The actual deed is kept largely off the page, leaving us to imagine the horrific details without being at the centre of the terror. Russell’s killer is a dark and dangerous individual. The level of pleasure taken from the kills is as disturbing as it is compelling.

Once again, she has produced a fine example of a police thriller, full of tension, misdirection and with a blend of drama and humour, that will play on the reader’s emotions together with moments of sad inevitability which made me pause. It’s just a shame that the clever, dogged and certain woman which is Geraldine Steel is allowed to spend so much time showing her vulnerability, self-doubt and her internal battle with the dynamic of her enforced demotion and transfer.