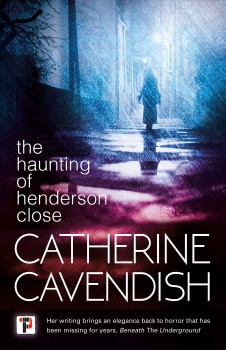 The Haunting of Henderson Close

Hannah has landed her dream job as a tour guide, playing the part of a woman living in 1830s Edinburgh. But when things start to go bump in the daytime as well as the night, she starts to wonder if she’s bitten off more than she can chew.

1831. Edinburgh is known as Auld Reekie for a very good reason. Its filthy streets are used to dispose of all manner of garbage, including noxious human waste. The streets of the Old Town are chock-full of poverty and despair, with families scratching a living as best they can, where the man finds work if he’s lucky and, like Mr McDonald, more often than not spending their money on alcohol rather than feeding or clothing their ever-increasing families. For women, prostitution was a common occupation, borne of desperation. In New Town, it’s a very different story, but it’s not often that the two come into contact, apart from through those determined to carry out charitable works, such as the indomitable and caring Miss Carmichael, who visits the McDonald family as often as she can, with gifts of money and clothes for the children.

2018. Hannah has left the south of England after her divorce and, almost on a whim has moved to Edinburgh to take on what might have been a dream job, apart from the low pay, and the ghosts. She’s an ‘in character’ tour guide, taking visitors around the now derelict Henderson Close, buried under the foundations of the newer buildings that grew up over it. Now the Close is a popular tourist attraction, drawing visitors who revel in the spooky atmosphere and enjoy the frisson of vicarious fear they get when shown the spot where Miss Carmichael, renowned for her charitable aid, was murdered. There’s even a dark patch on the floor that is said to be the blood spilt as she died.

I absolutely love reading ghost stories, which is strange, as I’m not a fan of watching them on TV. Maybe the latter seems a bit too ‘real’. As a kid, I was totally freaked out by films like The Signalman, and The Innocents. I had high hopes of The Haunting of Henderson Close, and it certainly lived up to its promise. Catherine Cavendish delivers a clever, accomplished book that entirely normalises the ghost narrative and the timeslip aspects of the story, making it perfectly easy to suspend disbelief and imagine myself on one of Hannah’s tours, seeing and experiencing things that jump straight into the realm of the supernatural.

Hannah does her best to stay calm and reassure her visitors that anything they experience is all part of the tour, but as strange experiences mount up, the cracks in her façade begin to appear. Then, when one of her fellow actors/tour guides disappears, things hot up. By then I was wholly immersed in Hannah’s story, getting a fright when she did, mentally encouraging her to confide in another fellow guide, the stoic and dependable George, who doesn’t stand any nonsense when a ghost hunting group gets what they wanted as well as more than they bargained for.

I thoroughly enjoyed both parts of the timeslip divide and was impressed by the skill with which Henderson interweaved the two. At times I was confused, but so were Hannah and her friends and that confusion contributed to a well-rounded, engrossing story of ordinary people caught up in extraordinary events. Even as a card-carrying atheist, I would happily have turned to the trappings of religion in an attempt to counter and contain the evil walking the shadows of Henderson Close, and for me that was proof, if I needed any, that the things that went bump in the night seemed very, very real.